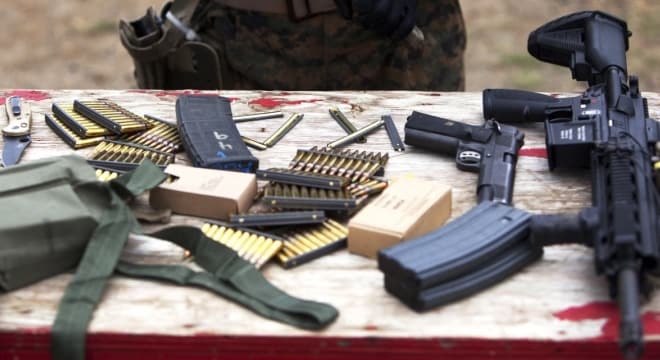 A ban on pre-ban detachable magazines capable of holding 10 or more rounds set to become active on Saturday has been put on hold by a federal court (Photo: DOD)

A federal judge approved a motion Thursday from gun rights advocates to halt enforcement of a ban on 10+ round magazine possession set to go into effect July 1.

U.S. District Judge Roger T. Benitez handed down a 66-page order this week siding with a group of California residents in conjunction with the National Rifle Association who argue the state’s prohibition against “high-capacity magazines” violates their Second Amendment rights.

The legal maneuver delays a measure prohibiting possession of “pre-ban” magazines scheduled to take effect Saturday, with violators looking at up to a year in a county jail and a fine of $100 per instance. Last year, state lawmakers closed the loophole in a 2000 law that banned high-cap magazines except for those already in circulation.

Benitez, a former California Superior Court judge and 2004 appointment to the federal bench by President George W. Bush, found a host of flaws with the pending magazine ban.

“While there are other exceptions for licensed firearm dealers, manufacturers, and gunsmiths, there are no exceptions made for members of the Armed Forces, or those honorably discharged or retired,” he said. “Likewise, there are no exceptions for civilian firearms instructors, concealed weapon permit holders, or families who live far from timely help by local law enforcement agencies and who must be self-reliant for their own defense, defense of their families, or of home and property.”

Benitez also spoke to the core of the Second Amendment, saying “Finally, there are no exceptions made for citizens who, should the need ever arise, may be called upon to form a militia for the protection of the state from either foreign or domestic enemies.”

In any case, the state has waffled on how gun owners with such magazines can comply with the new law, withdrawing controversial proposed emergency rules last December without replacement.

In a statement responding to the decision, California Attorney General Xavier Becerra argued in recent years large capacity magazines have been used in mass shootings across the country, including a terror attack in San Bernardino that left 14 dead.

“Restricting large capacity magazines and preventing them from ending up in the wrong hands is critical for the well-being of our communities,” said Becerra. “I will defend the will of California voters because we cannot continue to lose innocent lives due to gun violence.”

The legal setback on magazines is the second handed to Becerra this week, coming just days after the California Office of Administrative Law blocked proposed new rules on classifying “assault weapons” and bullet buttons.

Attorney Chuck Michel, whose firm is handling the magazine challenge for the NRA and California Rifle and Pistol Association, said more legal challenges are to come.

“This lawsuit is one of many that have been or will soon be filed on behalf of NRA and CRPA members in California,” said Michel in an email to Guns.com. “Gun owners can celebrate this particular win for freedom this July 4th weekend, but the fight isn’t over. NRA and CRPA continue to work together relentlessly to fight for their Second Amendment rights in Sacramento, in the courts, and in the regulatory agencies.”