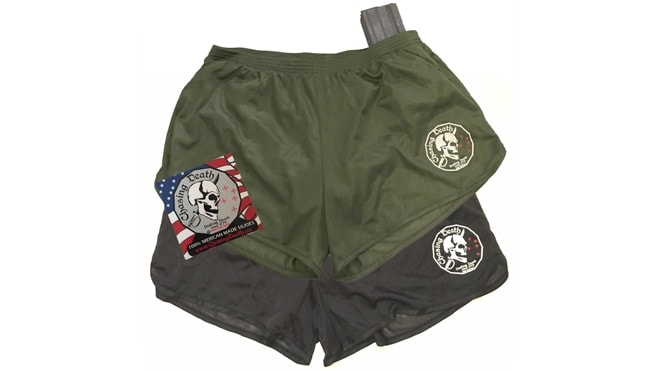 For Marine Corps veteran Nester Pro, nothing feels better than a hardcore physical training session, and “you’ve got to be wearing the silkies.”

Pro started selling the “Silkies 2.0” exercise shorts through his company, Chasing Death Apparel, and pimping his brand on Facebook in military-focused groups and Instagram. One Facebook group Pro frequented until recently, called Mendleton, a play off of Marine Corps Base Camp Pendleton, is a military men’s only closed group with almost 37,000 members. An admin from the group recently booted Pro. More on that later.

Marines have a special bond with the sheer material short-shorts. Called Ranger panties by some outside of the Marine Corps community, “silkies,” as they’re affectionately known to Devil Dogs, are probably shorter than any pair of shorts a decent human being would wear. But Marines, especially infantry Marines like Pro, pride themselves on being high-octane lunatics who aspire to offend anyone with normal sensibilities, some wearing silkies two sizes too small to enhance the way the silky fabric accentuates their crotches and its contents.

“It’s satisfying to know that everybody around you can see the shape of your genitals and is doing everything in their power not to visualize it,” said Marine veteran John Kropp in a Facebook response to Guns.com.

For others, the benefits are a little less offensive.

“Ummmm because they’re daisy dukes of freedom?” said active duty Marine Keith Richardson. “They’re more comfortable than … (other) PT shorts and double as swim trunks and as PT attire. They come in black. They show just enough skin to be noticed out the corner of your eye. They help get a nice tan on your legs compared to other shorts. You can spot another marine easily if they have a pair. Great airflow to make sure your package isn’t marinating in your man juice.”

Silkies are the quintessential Marine shorts for physical training, said Pro, an infantry Marine who served for seven years until 2009.

The “moto run,” or motivational run, is a several-mile run that signals the completion of Marine Corps recruit training and precedes the formal graduation formation ceremony. Friends and family of the graduating class line the course and cheer, offering motivation and support.

The silkies once issued to graduating Marines, and those sold at base exchanges are produced by clothing company Soffe and manufactured outside the U.S., Pro said.

“I decided I wanted them to be made back in the U.S., and then I’m like ‘well, if I’m going to make them here in the U.S., what do I want when I wear them out?’ Sometimes I go shooting and I want — instead of putting on like a war belt or something around your waist to hold one mag, I would stick an AR mag in the waistband, but that easily falls out.”

Pro said the pocket is also great for carrying a wallet, keys or cell phone. The shorts are regaining popularity in the military community. There are several alternatives to the Soffe brand silkies and a San Diego gathering, called the “Silkies Hike,” dedicated to the garment.

Despite its popularity among the military community, silkies aren’t flying off the shelf of military base exchanges.

“We don’t sell a lot of them,” Hannah Gore, a sales associate at a Camp Pendleton exchange, told Guns.com on Friday. “The Marines go for other kinds of shorts based on what their commands want.”

Gore said the exchange will only sell up to five pairs of silkies on a busy day.

Camp Pendleton spokesperson Capt. Brian Villiard said based on a recent uniform order, Marines are no longer allowed to wear silkies during “green on green” — referring to shirt and shorts — unit PT events, but can don the silky smooth shorts in civilian PT gear.

“Now Marines are being issued the cotton PT shorts,” Villiard said. “I came in in 1997 and I remember silkies being all the rage. The old guideline of not being eccentric still comes into play, so if your shorts are too small, rest assured that someone’s probably gonna say something to you about it.”

Pro said Marine commanders were offended because the wearing of silkies became a sort of mockery of the military or the Marine Corps.

“But they’re workout shorts, not uniform shorts,” Pro said. “They always try to take away anything we enjoy.”

Pro said he prides himself on having the shortest, snuggest silkies on the market.

Reyes, a highly-trained Marine recon sniper, has amassed a significant following in the military community since starring on the HBO series “Generation Kill” about the Marine Corps invasion of Iraq in 2003. He also worked as a consultant behind the scenes to ensure Marine culture was depicted correctly.

“We had a business meeting maybe three weeks ago, but he loves our silkies because he doesn’t have to hike it up anymore,” Pro said. “They’re snug. They’re high and snug, which gives you access to more workouts, like leg workouts and whatnot. It’s like women when they wear their spandex. They wear spandex because it gives them more freedom to do whatever they want.”

“A lot of the girls have been asking for pink. Not even Soffe makes pink. We heard what they were asking for and we decided to make some, so we’ll see how they do,” Pro said.

Pro is also looking to partner with organizations like the Breast Cancer Foundation, who he wants to offer silkies to at cost and donate a portion of proceeds to its cause.

The Chasing Death logo is a call to the warrior ethos. Pro has a longstanding obsession with the history of the Knights Templar, a Christian order of warriors started in the 1100s. His logo takes on an element of the 1st Marine Division’s emblem. It includes the five stars of the Southern Cross constellation, under which Marines fought in the battle at Guadalcanal during WWII. The stars are replaced with Templar crosses.

A skull sits over a Marine non-commissioned officer sword. The bottom of the logo reads “Dealing Death since 1775,” the year the American Revolution began and “Made in America.”

These visual elements are wrapped in a tridecagon, chosen because its shape represents that of viking shields. When Marines lose their brothers to combat, like Pro has while fighting in Iraq, many will reference Valhalla, the afterlife which welcomes vikings who’ve died in battle.

A word Marines often like to use to describe their battle-readiness or toughness is “savage.” It’s also used when describing something rugged, bad-ass, hard core or just plain savage. They will often attempt to outdo one another in feats of strength and crudeness. That’s what happened when Pro got booted from the Mendleton Facebook page, where Marines post images and video of everything from attractive women to enemy combatants being dispatched by U.S. troops in a war zone overseas. Sex and violence — Savagery in its purest form.

When Pro’s Facebook page got close to 1,300 “likes,” he said he would post a nude photo if the page reached that milestone. It did and he did. Pro was admonished by one of the Mendleton page moderators and was threatened with ejection. Recently, Pro found an offensive video he thought it was hilarious and posted it to the Mendleton page. Within 10 minutes a moderator seized on the video and kicked Pro out of the group.

Pro said Mendleton is erring on the side of caution. Marines United was another Facebook group primarily comprised of Marines. It was the subject of news stories and a Marine Corps investigation for hosting images of nude females, some Marine females and others active duty female Marines.

Mendleton was also the subject of news reports when a woman “infiltrated” the page, revealing inappropriate posts about an underage troubled teen who attained internet stardom after appearing on the “Dr. Phil” talk show.

Shortly after the story broke, the page creator defended the page, calling it “one of the greatest community gatherings that I’ve personally witnessed.”

Some members of the group occasionally post to the page their feelings of despair and suicidal thoughts. In at least four cases Guns.com witnessed in the past several months, these posts are swarmed with comments of inspiration and understanding. Commenters will ask where the person lives, as Mendleton members live all over the country, and try to identify another member who lives nearby and can offer support in person.

Other posts involve a different kind of personal struggle. One Marine wrote about how he was going through a divorce and was distraught. While some of the comments mentioned “Jodi,” the name for any man who sleeps with another man’s significant other, most of the comments were encouraging, with some commenters offering their own personal stories.

Pro said he’s messaged one of the moderators and is looking to get back into their good graces. As a therapist and veterans’ advocate, Pro said he’s got a lot to offer Mendleton, which is connected to the Mendleton Foundation, a nonprofit that offers suicide prevention and other support to active duty personnel and veterans.

“They’re just doing their job,” Pro said. “They’re not trying to get shut down like Marines United. They’re hyper-sensitive. And I don’t blame them.”