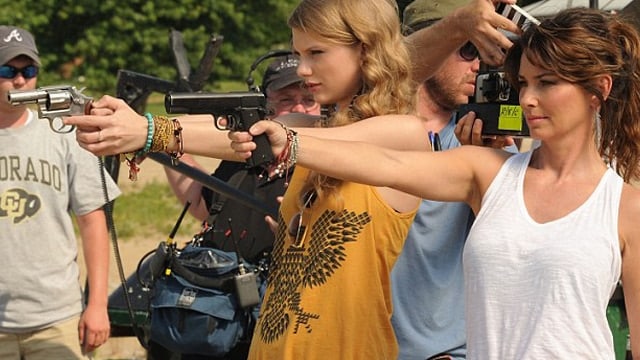 Nothing unusual about these two ladies on the range. (Photo: Getty Images)

Following up on an extensive survey on gun ownership, Pew Research highlighted results showing how women — a highly sought after group by the gun industry — compare to men.

With a sample size of 1,269 gun owners, men comprised of 62 percent of the total. Yet, only one out of every 22 women say they own a firearm. For the survey, Pew questioned 3,930 people in March and April.

Although male gun owners still outnumber females, Pew’s analysis shows similarities in their reasoning for owning a firearm as well as notable differences in viewpoints and experiences.

1. Women who own guns tend to become gun owners at a later age than men. On average, women said they got their first gun at age 27 whereas men reported they were 19 years old.

A Gallup poll last December showed crime victims are more likely to own firearms, and an earlier poll showed 60 percent of gun owners citing personal protection as the main reason for owning a gun.

Fifty-eight percent of respondents to a Pew survey in 2016 also said they own guns for protection, which includes 74 percent of those who have a gun in the home. 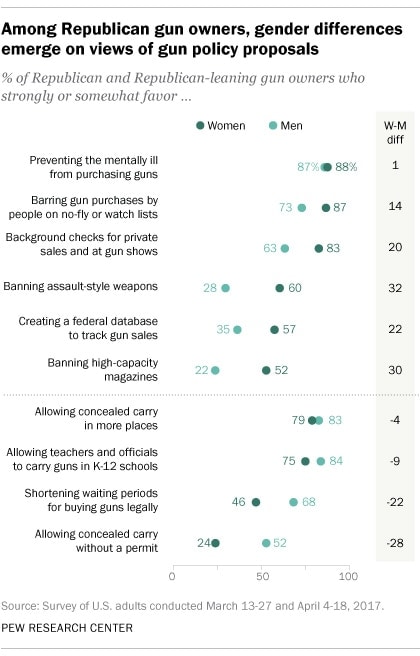 3. Women are less likely to go shooting or hunting than men (but differences seem marginal). While a majority of men say they often or sometimes go shooting, less than half of female gun owners say the same.

4. Female gun owners are less likely to say they watch TV or videos about guns and visit websites about guns, hunting or shooting.

Thirty-three percent of women often or sometimes watch TV shows or videos about guns whereas 43 percent of men do.

A review of Guns.com’s Facebook analytics, which contains comprehensive demographic information, shows 10 percent of its 866,686 fans are women compared to 90 percent of men.

5. Men are more likely to keep a gun both loaded and accessible at all times when they’re at home.

Forty-three percent of men agree compared to 29 percent of women. Yet, equal shares of men and women, 26 percent, say they carry a gun outside their home all or most of the time.

6. Majorities of both groups of gun owners — 70 percent of women and 77 percent of men — consider the right to own guns an essential part of their personal sense of freedom.

Also, a comparable percentage of both — 46 percent of women and 52 percent of men — say owning a gun is part of their overall identity.

Industry associates say women are buying more guns — as in buying a second or third gun — but whether or not there has been growth among women gun owners is still up for debate. While there are now official organizations and representatives for female gun owners, there hasn’t been a meaningful increase in their ranks.

The most recent General Social Survey, known for large sample size, published in 2014, on guns showed women gun owners at 11.7 percent. And, in the same vein, a 2013 Gallup survey exploring gun ownership showed 15 percent of gun owners are female.

In 2016, survey sources found that the issue of guns as a strong topic — especially for women — leading up to the presidential election.