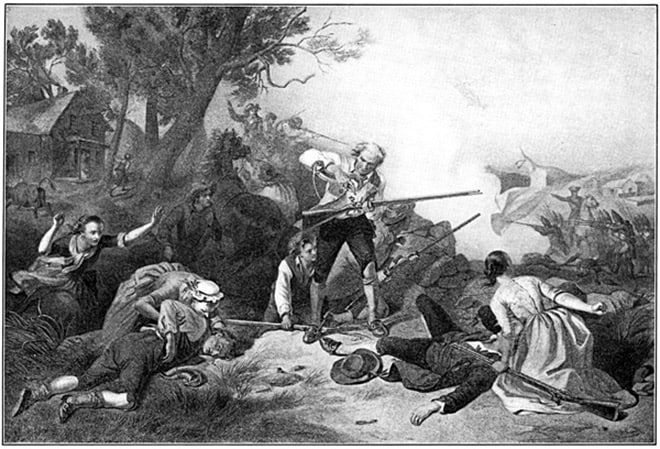 As Independence Day is upon us, painful and important divisions exist in the national conversation. People on all sides claim to know what America is all about.

It provides inspiration to look rearward, 200-plus years, and examine the words of those who shaped the new union. Much of what has been preserved in writing are heated defenses of one stance or another. Here are five quotes from back in the day, chosen for Guns.com for their references to arms.

Where there are people, divided opinions are inevitable. Before the Revolutionary War, through his quill pen, circa 1775, Thomas Paine, bemoaned the delay of outright war in response to community skirmishes with, and atrocities by, British troops:

“In almost every article of defence (sic) we abound. Hemp flourishes even to rankness, so that we need not want cordage. Our iron is superior to that of other countries. Our small arms equal to any in the world. Cannon (sic) we can cast at pleasure. Saltpetre and gunpowder we are every day producing. Our knowledge is hourly improving. Resolution is our inherent character, and courage hath never yet forsaken us. Wherefore, what is it that we want? Why is it that we hesitate?”

Much modern airtime is given to debates on whether the language of the Second Amendment refers to a regular army or the citizenry. Economist and representative to the Continental Congress Tench Coxe had this to say on the subject, published in a letter to the Pennsylvania Gazette in 1788:

“”Who are the militia? Are they not ourselves? Is it feared, then, that we shall turn our arms each man against his own bosom? Congress shall have no power to disarm the militia. Their swords, and every other terrible implement of the soldier, are the birth-right of an American… The unlimited power of the sword is not in the hands of either the federal or state governments, but where I trust in God it will ever remain, in the hands of the People.”

Speaking of regular armies, Noah Webster turned his concern to the domestic powers of a federal army. This excerpt is from a series of essays addressed to Benjamin Franklin in 1787, An Examination into the Leading Principles of the Federal Constitution Proposed by the Late Convention Held at Philadelphia, With Answers to the Principal Objections that Have Been Raised Against the System:

“Before a standing army can rule, the people must be disarmed, as they are in almost every kingdom in Europe. The supreme power in America cannot enforce unjust laws by the sword, because the whole body of the people are armed and constitute a force superior to any brand of regular troops that can be, on any pretense, raised in the United States.”

Poor Samuel Nasson of Massachusetts is often singled out as being against the individual right to bear arms. It would be more fitting to criticize his complete lack of fondness for the simple period as punctuation. Here — in original 1789 format — is his impassioned opinion regarding what we now call the Second Amendment:

“you know to learn the Use of arms is all that can Save us from a forighn foe that may attempt to subdue us for if we keep up the Use the-of arms and become well acquainted with them we Shall allway be able to look them in the face that arise up against us for it is impossible to Support a Standing armey large Enough to Guard our Lengthy Sea-Coast and now Spare me on the subject of Standing armeys in a time of-Peace the allway was first or last the downfall of all free Governments-it was by their help Caesar made proud Rome Own a Tyrant and a Traytor for a Master.”

Referring to Thomas Paine again, here he is, keeping it practical where world peace is concerned:

“Could the peaceable principle of the Quakers be universally established, arms and the art of war would be wholly extirpated: But we live not in a world of angels.”

Their words shaped our way of life, and lead me to wonder: what might the national conversation on arms sound like 200 years from now?