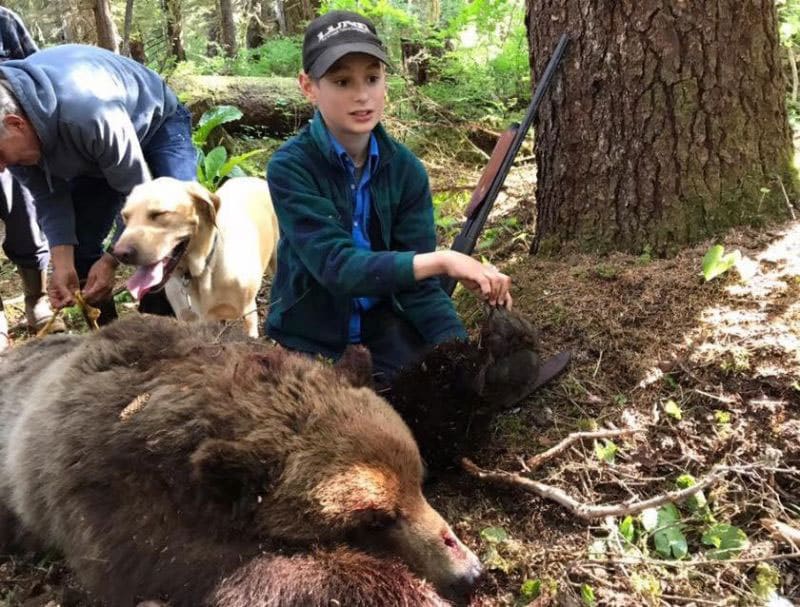 Elliot Clark posing with the brown bear that charged at him and his family. (Photo: Facebook)

An Alaskan boy armed with his trusty pump-action shotgun saved his family from a charging brown bear during a fishing trip last month.

The boy’s father, Lucas Clark, said it took his son, Elliot, four shots of birdshot to put down the sow, according to the Juneau Empire.

Elliot, who was 11 at the time but has since turned 12, was with his uncle, uncle’s dad, a cousin, and three dogs when they encountered the bear on their way to a fishing hole near Hoonah, about 40 miles – as the crow flies – west of Juneau, on June 18.

Clark said the group was walking through the woods, with Elliot third in line, when the bear came charging out. “The bear came down the trail at them, fella in the front, who was (Elliot’s) uncle, the bear was on him so quickly that he didn’t have time to take his rifle off his shoulder,” Clark said.

Having gone through the first two men, the bear turned its attention to Elliot and his unarmed cousin, but Elliot quickly raised his shotgun and fired.

“His first shot was a light load of birdshot. That first shot hit (the bear) in the shoulder and did absolutely nothing. The next shot hit ’em in the nose and traveled down through the neck,” Clark said.

The third shot hit the bear in the shoulder and back and caused it to drop to the ground and slide toward Elliot, Clark said, adding the third shot was so close that it left powder burns on the bear’s mouth. But the bear was still alive, so Elliot shot it one more time. And for safe measure, his uncle fired the final round, killing the bear.

Clark said his family had armed themselves after seeing the bear in the area for the past several days, but said things could have easily turned out much differently.

Clark, a bear hunting guide who was in Washington at the time of the encounter, had not yet gotten around to putting the sling on his son’s shotgun. Because of this, the boy was carrying the gun in his hands instead of on his shoulder, which gave him much quicker access to the firearm as the bear charged.

Also, just the day before, Elliot called his father to ask permission to remove the plug from his gun. With the plug inserted, the gun would have only held three rounds. Clark said living in bear country, they try to stay prepared and take precautions, but also acknowledged that, even then, sometimes it’s not enough.

“It’s not just a matter of skill or preparedness. It can happen to anybody and it can go wrongly, especially a kid,” Clark said. “We pray for our kids every day and in my mind that’s the biggest factor right there.”