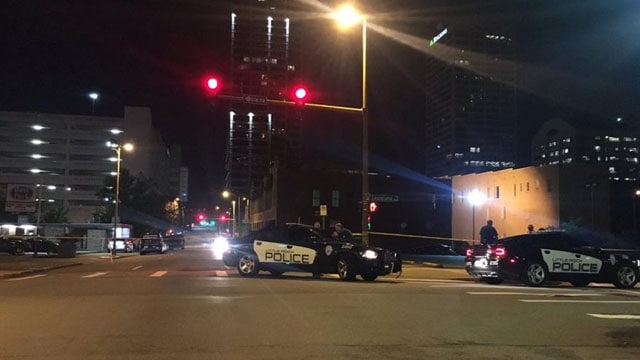 Authorities say the shooting erupted at the Power Ultra Lounge because an argument escalated between two rival gangs who have an ongoing dispute, which has also been the subject of a number of other shootings in the area. Despite one man arrested for unrelated gun charges, no one has been charged in the nightclub shooting.

Little Rock Mayor Mark Stodola expressed his and the community’s frustration that “time, resources, and coordination are not yet yielding the results we want.” The city has seen a bump in homicides, with 29 so far compared to 19 this time last year. “This was not an act of terrorism, but a terrible local tragedy and does not appear to have been a planned out shooting,” he said. “It appears that this was a disagreement — amongst a small subset of individuals at a concert — that turned violent because of the presence of existing rivalries and weapons.”

Arkansas Gov. Asa Hutchinson called for “a comprehensive enforcement strategy” to remove violent threats. “The state will participate and bring assets to the table to support local law enforcement efforts,” he said.

Stodola added he would be working with Hutchinson and other state lawmakers “to crack down on those who are on probation and parole who are illegally carrying weapons” and that the city would be working with the U.S. Attorney’s Office to prosecute gun offenders at the federal level, which has stiffer penalties for violations. His statement explains ongoing efforts like the city’s Violent Crime Apprehension Team, which consists of 25 officers working full-time in violent crime hotspots.

But also Stodola described economic opportunities as a means to deter crime. “Opportunity is the key – and I have no magic wand to undo the disparities in opportunity, but together we can do the hard work that it’s going to take to change that,” he said, adding violence and crime “cannot be resolved simply through arrests and convictions.”

The Little Rock Police Department confirmed 25 victims suffered gunshot wounds and three others were injured while trying to escape the mayhem on Saturday. As of Tuesday, five victims remain hospitalized, one in critical condition. All of the victims – who range in age from 16 to 35 years old – are expected to survive, while local residents and city officials say it was a miracle no one was killed.

Days after the shooting, police arrested Ricky Hampton, a 25-year-old Memphis rapper known as Finese 2Tymes, who was headlining a concert at the club the night of the shooting, for an unrelated warrant while performing at a club in Birmingham. The Justice Department said Hampton was wanted for felony possession of a firearm, stemming from a June incident following a performance at another Arkansas club. Prosecutors say Hampton opened shot a driver in the neck through the car’s rear window because he was blocking his way.

Little Rock Police confirmed that no arrests have been made in relation to the weekend club shooting, which unfolded around 2:30 a.m. It’s unclear if authorities have identified any suspects. According to reports, police in the capital city responded to 12 drive-by shootings in the nine days leading up to the club shooting.

Stodola was also steadfast in saying the club would be shut down. The club’s liquor license is currently suspended with a hearing set for July 10, according to reports. And this isn’t the first time either. In fact, the club’s liquor license has been suspended 11 times in the past for failure to pay taxes, in addition to more than half a dozen citations for 14 various violations, including furnishing alcohol to minors and allowing alcohol to leave the premises. The club has recently been accused of disorderly conduct, “failure to be a good neighbor,” and allowing the possession of weapons on the premises.

Stodola urged the community to come forward and communicate with law enforcement. “We cannot solve these cases without the community adopting the desire to make sure that Little Rock is going to be a safe place to live and to grow up,” he said.