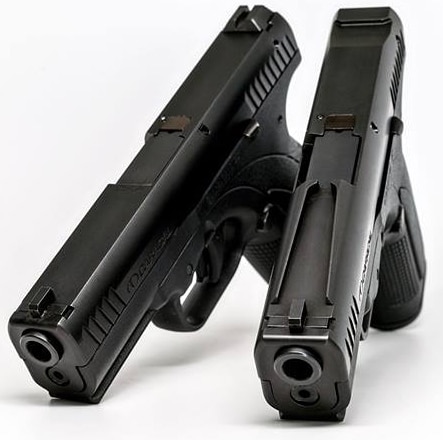 The Enhanced F pistol by Caracal comes with either standard  sights, left, or with the Quick Sight System, right. (Photo: Caracal USA)

Released to the public on July 4, HawkTech Arms and ABI Tactical were among the first to stock the pistol on its shelves. Caracal says additional FFL dealers are being added weekly to accommodate customers.

The Enhanced F – Limited Edition pistol is a striker-fired, polymer 9mm pistol. Utilizing a Caracal International frame paired with a Caracal USA slide, the gun is assembled in the U.S.

Featuring a short, double-action trigger, the gun boasts an 18-round magazine. The pistol comes with standard three dot sights or a “Quick Sight System.” The Quick Sight setup places both the front and rear sights on a single focal plane permitting shooters to rapidly acquire a clear flash sight picture on target.

Chambered in 9mm, the pistol is a striker fired design.  (Photo: Caracal USA)

The Enhanced F pistol retails for $599 and is backed by a limited lifetime warranty for the original owner.