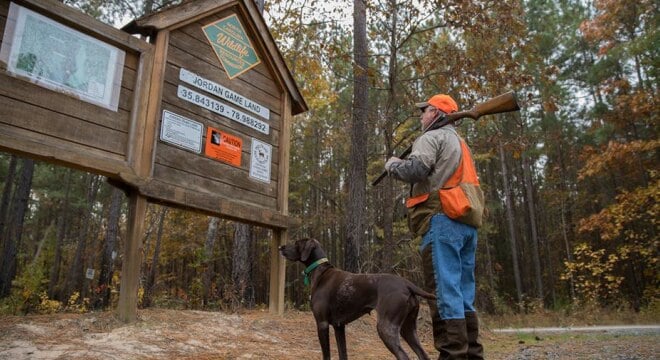 Backers of the measure contend it could double the number of hunting days for working sportsmen. (Photo: N.C. Wildlife Resources Commission)

A measure that would open public lands to Tar Heel State sportsmen on Sundays is headed to Gov. Roy Cooper for consideration.

The measure, HB 559, passed the Senate 31-11 and the House 80-25 last week and aims to relax some of the strict Sunday hunting rules in the state.

“This legislation will significantly increase access and opportunity for North Carolina’s sportsmen and women, particularly youth and hardworking adults with limited weekend hunting opportunities,” said bill sponsor, Republican House Majority Leader Rep. John Bell, in a statement. “Reducing barriers to participation in hunting is critical to the furtherance of our sporting traditions for future generations.”

Bell’s proposal in its final form would greatly modify the Outdoor Heritage Act adopted in 2015, which lifted the overall ban on Sunday hunting that dated back to the 1870s. Gone would be the ban on hunting in the state’s two largest counties, Wake and Mecklenburg, as well as restrictions on hunting within 500 yards of a home and ban on hunting on public land. Further, North Carolina’s counties would find it harder to opt out of allowing hunting on Sundays under the new law, requiring a county‑wide referendum. Taking upland game birds would be allowed as soon as 2018, pending research conducted by conservation officials.

A moratorium on hunting between 9:30 a.m. and 12:30 p.m. — traditional church hours — as well as hunting within 500 yards of a house of worship will remain. The use of deer dogs will remain off the table.

The bill was supported by a consortium of outdoor groups including the National Shooting Sports Foundation, Safari Club International, the National Rifle Association and the Congressional Sportsmen’s Foundation. The groups argued the bill would open 2 million acres of public land for hunters and, as Saturdays are often crowded with competing activities, “it is likely that allowing Sunday hunting will more than double the number of days youth and hard-working families can hunt.”

Gov. Cooper, a Democrat, has not commented on his intentions to sign or veto the measure.