Over 100 shot in Chicago during holiday weekend 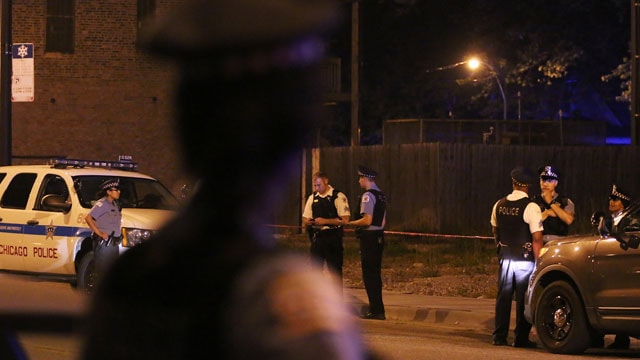 Authorities investigate after one of more than 100 shootings over the holiday weekend. (Photo: Chicago Tribune)

More than 100 people were shot in Chicago over the long holiday weekend, with more than a dozen fatalities from Friday afternoon into early Wednesday morning.

Anthony Guglielmi, chief spokesman with the Chicago Police Department, expressed frustration over the high numbers. He said they “deployed some very successful tactics over the Memorial Day weekend,” yet the success of those tactics did not appear to carry over through the Independence Day weekend.

Guglielmi called it “perplexing,” according to reports from the Chicago Tribune.

A total of 15 people died in the city as a result of gunfire and almost half of the shootings occurred within a 12-hour span at the end of the four-day weekend. There were reports of 42 people shot from between 3:30 p.m. Tuesday and 3:30 a.m. Wednesday. The youngest reported gunshot victim for the weekend was just 13-years-old and the oldest victim a 60-year-old man, both of whom survived.

The number of shootings were nearly double, and the number of fatalities triple that of last year’s Independence Day weekend, which saw 66 gunshot victims and five fatalities. Although authorities noted this year’s holiday weekend had an extra day, the department also sent out nearly 1,300 additional police officers for patrol.

Most of the violence was centered in the city’s West and South sides, and Guglielmi said while a “handful” of the shootings were retaliatory in nature, the vast majority were over “petty disputes,” some of which were further fueled by excessive alcohol consumption.

Nonetheless, the Chicago Police Department noted that while the city saw a violent weekend, “many districts went without a single shooting.”

Authorities also pointed to the arrest of 58 people, who are believed to fuel the violence, and the seizure of some 159 illegal firearms over the weekend.

“While our efforts are deterrent, if we don’t create a culture where someone thinks twice before picking up a gun, we’ll see this cycle continue,” said first deputy superintendent Kevin Navarro.

“We have to change the underlying culture,” he said.