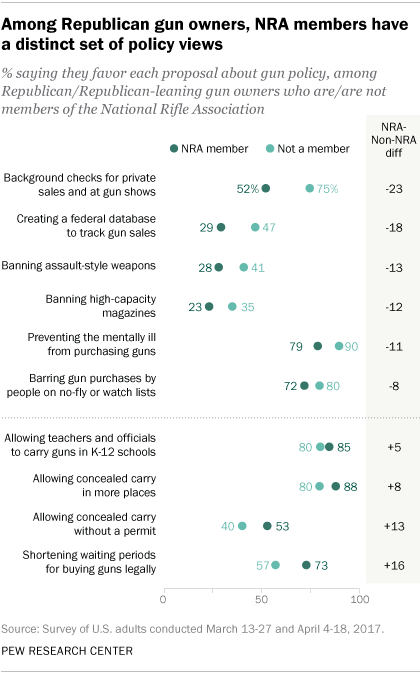 National Rifle Association members express a significantly different attitude about politics and gun ownership than gun owners who are not members, according to an analysis of survey results offered by Pew Research.

While it may come as no surprise, NRA members are more critical of gun control policies and lean farther to the right than non-member gun owners, Pew’s analysis shows.

The questionnaire found that a majority of members and non-members favored six of the 10 policy issues, but there was a more than 10-percentage point difference for a different six of the 10 issues.

The largest gap, 23 percentage points, was between views on background checks for private sales and at gun shows. Fifty-two percent of NRA members agreed whereas 75 percent of nonmember gun owners agreed.

Views closest in agreement — as in less than 10 percentage points apart — included No Fly No Buy lists; allowing concealed carry in more places; and, with only a 5 percentage point difference, allowing teachers to carry guns in schools.

Politically, a majority of gun owners, 61 percent, are Republicans, but 77 percent of NRA members say they belong to the Republican party or lean that way. For non-member gun owners, political leanings are more evenly split. Fifty-eight percent claim or lean Republican while 39 percent are Democrats.

The survey also included questions about lifestyle. In short, NRA members own more guns than non-members. About half, 52 percent, of members say they own more than five guns compared to 24 percent of nonmembers.

And, members are more likely to shoot their guns and keep them loaded. Sixty-six percent say they shoot often or sometimes versus 49 percent of nonmembers, 53 percent say they keep a gun loaded and easily accessible at all times compared to 34 percent of nonmembers, and NRA members are twice as likely, 44 compared to 22 percent, to carry a gun outside the home.

But, NRA members are more likely to take gun safety courses. Eighty-four percent of members say they have taken one at some point compared with 67 of non-members.

Three out of 10 adults in the U.S. say they own a gun and in that group only about 19 percent say they belong to the NRA, a group that claims 5 million active members.

The NRA is known for passionately defending gun rights and trying to advance a pro-gun agenda — often with the use of polarizing rhetoric — leaving many divided in how the public views its influence. Forty-four percent of all adults say the organization has too much influence over gun legislation, 40 percent say it has the right amount and 15 percent say it has too little.

For NRA members, they are largely satisfied, 63 percent, with the amount of influence the gun lobby has over U.S. gun policy versus 50 percent of non-member gun owners who view the NRA as too influential.

However, NRA members tend to be more politically active, the survey shows. Forty-six percent of members said they have contacted a public official to express an opinion whereas only about 15 percent of non-member gun owners have as well.

Pew conducted the survey in March and April, asking 3,930 people from across the country. Of that figure, 1,269 said they owned a firearm.