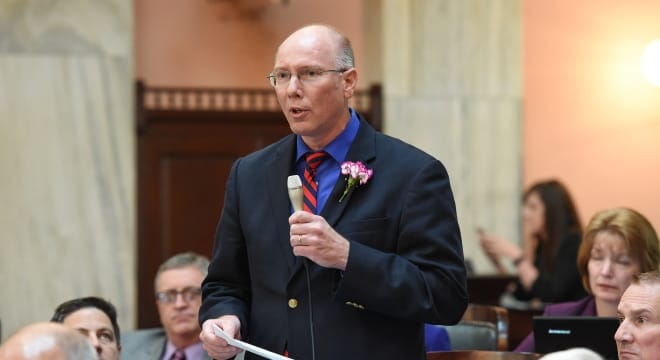 A House measure that would allow those with a concealed carry license to ignore “no gun” signs is headed to the Ohio Senate.

Termed the Decriminalization Effort for Ending Notorious Deaths Act by its sponsor, HB 233 states that members of the military or those with a carry permit would not be guilty of violating most areas deemed gun-free. The measure passed in a Republican-heavy 65-31 vote on Thursday.

The proposal’s language protects CHL holders and military members found carrying a weapon in a gun-free zone from arrest and prohibits law enforcement from seizing their guns or ammunition. However, if asked to leave they must comply under threat of a fourth-degree misdemeanor criminal trespass charge, which can result in 30 days in jail and fines of up to $250.

The bill also removes daycares from the list of places that must post gun-free zone signs and modifies posting requirements for airports and government buildings, as well as decriminalizes carrying firearms into a liquor establishment.

The Ohio Chamber of Commerce, Ohio Coalition of Battered Women and the Ohio Restaurant Association joined gun control groups in testifying against the bill in committee this week.

“The state representatives that voted for this bill should be ashamed of themselves,” said Maureen Washock with Moms Demand Action in a statement. “This legislation would undermine private property rights by allowing people to bring hidden, loaded handguns onto private property – even if the owner has posted a no-guns-allowed sign.”

The bill has the backing of local and national gun rights organizations.

Now in the state Senate, where the GOP controls three out of four seats, a successful vote there would send the measure to Republican Gov. John Kasich for consideration. Kasich was endorsed by the National Rifle Association in his 2014 reelection and proclaimed his support for the Second Amendment in his bid for the White House last year.