Ballistics gelatin is perhaps the most attractive media to use for your own terminal performance testing. All it takes is some know how, time, sweat and money…

Recently, Guns.com ran an article of mine focusing on terminal performance testing and materials. While I have tried a variety of test media during the course of my ballistic misadventures, I much prefer working with gelatin due to its photogenic nature and the easy cleanup it affords.

What follows is a basic guide to preparing a gelatin test block. While the procedure below is by no means the only way to approach making gel blocks, it is the method I have found to be the most convenient and hassle free.

Gelatin blocks can and will grow cultures of mold and bacteria. In order to minimize the amount of contaminates introduced into the gelatin, sterilize all tools and containers that will come in contact with the gelatin with a light bleach solution. Also do your best to sterilize your work area and keep your hands clean.

The density of a gel block depends on the weight ratio of gelatin powder to water. For a block of 10 percent density, add 1 pound of gelatin powder to 9 pounds of water. While 10 percent density is the standard for most ballistic test labs, I often mix my blocks to a density of 20 percent (2 pounds of gel to 8 pounds of water) for comparative testing. The reason I mix to such a density is that the blocks stop bullets faster than the standard ten percent, which in turn means less material to transport to the firing range. Refer to the chart below for additional mixing ratios.

This step can be broken down further into four parts: 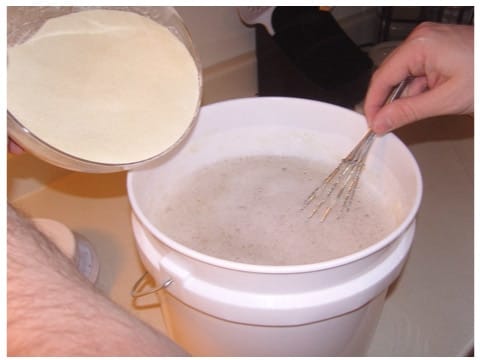 Gradually stirring the gelatin into the water will minimize clumping. Mixing is easier if batches are kept small. (Photo: Jason Wimbiscus) 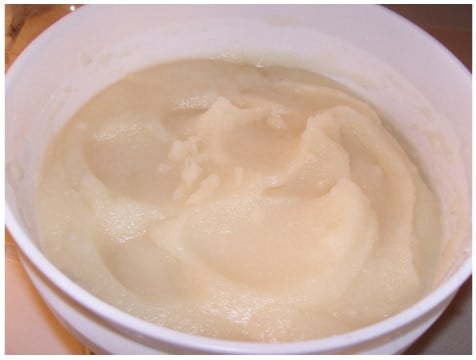 Once the gel powder has been thoroughly mixed with the water, it will have a consistency similar to mashed potatoes. The mixture should be refrigerated for two to four hours before continuing with the process. (Photo: Jason Wimbiscus)

Then place the pot containing the bucket on the stove top and heat. Keep the heat as low as possible. In my research on how to make gel blocks various sources list maximum mixture temperatures from 104F to 140F. I have found that the gel blocks have the greatest transparency if the hydrated mixture is heated just enough to completely melt. This optimum temperature will be between 100 and 104 degrees Fahrenheit. The melting process will take substantial time and due diligence is required to make sure the mixture does not get too hot. Stir the mixture periodically during the melting process. 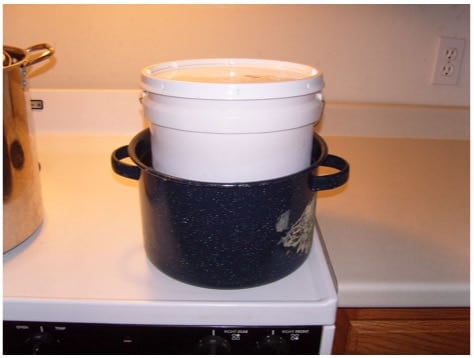 Use a double boiler setup to melt the hydrated gel mixture. Take care to prevent the water from actually boiling and the gel solution getting too hot. (Photo: Jason Wimbiscus)

A thick layer of foam will likely develop on the surface of the mixture. This can be skimmed off with a slotted spoon, or a net made from a fine mesh such as a nylon stocking. There are also chemical de-foaming agents that can be purchased.

Remove the bucket containing the gel mixture from the pot and carefully fill the containers you are using as molds. Professional grade molds can be purchased but straight walled plastic storage containers will work in a pinch. Make sure to skim off as much foam as possible and stir in a few drops of cinnamon oil before placing the lid on the container.

Allow the mixture to cool to room temperature before refrigerating. Refrigerate at approximately 34 degrees Fahrenheit for at least 72 hours before shooting the block. 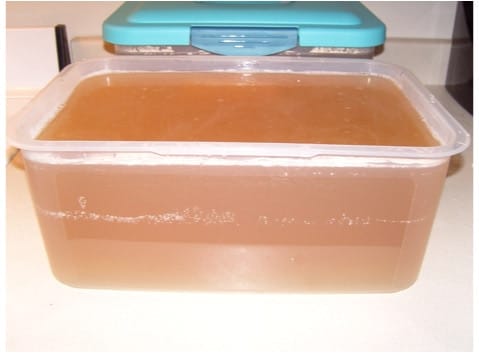 After filling the mold, allow the gel to cool to room temperature before refrigerating. Refrigerate at 34 degree Fahrenheit for 72 hours before shooting the block. (Photo: Jason Wimbiscus)

When using a flexible, plastic container, the cooled block can be removed by turning the container upside down and shaking vigorously while pulling the sides of the container away from the block. If using a metal container, a plastic liner will facilitate removal.

The calibration of a gel block involves firing a steel BB into the block at a velocity of 600 f/s. In the ideal block of 10 percent gelatin, the BB should penetrate 3.25 to 3.75 inches. Mathematical formulas exist to adjust results obtained from gel blocks where the BB penetration varies from the ideal by +/- 2 inches. 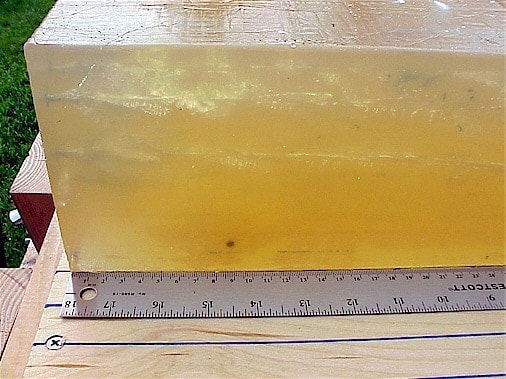 Calibrating a homemade gelatin block with a BB at 600 fps. (Photo: Jason Wimbiscus)

I do not calibrate my blocks for two reasons. First, the  amount of money required to purchase an air rifle capable of launching a BB at 600 f/s will also buy a lot of interesting ammo to test. Since I work with a very limited budget, I have to set my priorities appropriately. Second, I am not striving to produce test results that will stand up to scientific review as such is beyond what I can reasonably obtain working out of my kitchen. To produce thoroughly scientifically valid results, not only would I have to produce near ideal gel blocks, but I would also have to test a single load multiple times and then run a bunch of statistics calculating minimum, maximum, mean, and median penetration and expansion, as well as have to think back my college statistics class to remember what standard deviation is. Not only would such measures turn a hobby into chore, it would reduce the number of loads I could test per order of gelatin powder. Obtaining scientifically valid results from two rounds could easily cost $100.

My tests are intended to be comparative. To elaborate, I want to see how load X compares to load Y in the same batch of gelatin. Admittedly, the test results I obtain on Wednesday cannot be fairly compared to the results I obtain on Saturday, and neither set of results should be compared to what comes out of an FBI test lab. That being said, non-scientific terminal performance tests can still reveal a lot of useful information about the potential of a given load. If you want to see if that newly on the market all copper super bullet for your favorite elk round really will penetrate deeper than the budget softpoints you bought on clearance, then an amateur gel test may be in order.