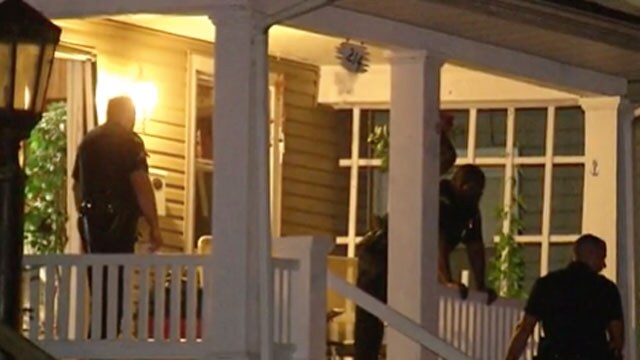 According to reports, police have been to the home numerous times in the past. (Photo: WDTN)

A 53-year-old man was shot and killed after he forced his way into his ex-girlfriend’s home in Dayton last week.

Daron Orr was pronounced dead at the scene, according to reports from local media. The woman, who has not been publicly identified, was questioned and released.

Police say the woman placed two separate calls to 911 on July 4: The first saying Orr was trying to break in, and the second saying she had shot him. Dayton Police Detective Gregg Gady confirmed that by the time police arrived, Orr had already kicked in the door and gained entry to the woman’s home.

Grady also confirmed the two were previously in a relationship, but not at the time of the shooting. According to neighbors, the couple’s relationship appeared to be a tumultuous one and Orr was often caught acting aggressively towards the woman.

Neighbor Dwayne Berry told reporters he could hear Orr banging loudly on the woman’s door, which she simply ignored. Berry also said Orr would should up at all hours of the night and rev up his engine outside of the woman’s home.

Without elaborating, authorities said Orr, who had a criminal history that included felony possession of weapons and cocaine, was accused of committing “serious crimes” against the woman the night before the shooting. Orr was also arrested in May after he assaulted and threatened the woman. Reports indicate police have been called to the home nearly half a dozen times.

Berry, who moved in a short time before the woman, said he’s known the woman for nearly two decades, but never knew she owned a gun. Berry also indicated that he’s glad she does.

“I hate that it happened to him, but I’d rather it happen like that than him break in and actually kill her,” Berry said of the shooting.

Grady said the woman has fully cooperated with the investigation. She has declined to publicly speak with reporters.