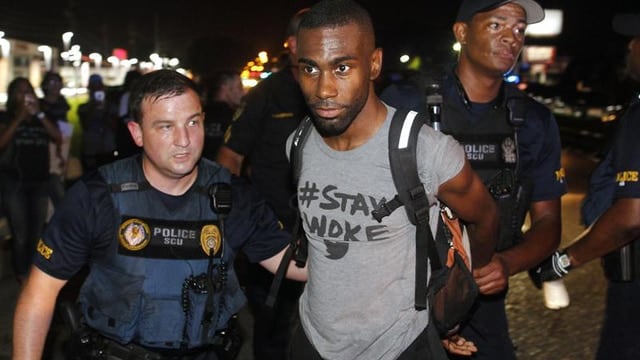 A Louisiana police officer blames Black Lives Matter and its leaders for an ambush attack that left him permanently disabled, according to a lawsuit filed Monday in a Baton Rouge federal court.

The officer filed the $75,000 case anonymously, listing his name as Officer John Doe Smith, but describes him as a 42-year old East Baton Rouge Parish police officer with 18 years experience and two children.

Local media reports the description matches Nick Tullier, an East Baton Rouge sheriff’s deputy who was almost killed in an ambush attack on July 17, 2016. The shooter, Gavin Long, opened fire on six police officers in the wake of the police shooting of Alton Sterling. Long killed three officers and injured three more before he was killed in a shootout with a SWAT team.

The complaint contains examples — in addition to the July 2016 incident that injured Smith — in which Black Lives Matter had organized protests of police shootings of unarmed black men that ended with violence, disruption or property damage. The lawsuit alleges the group contributed to the violence or, at least, encouraged it by failing to condemn it.

“At least 11 police have been shot dead and at least nine more wounded by BLM protestors, activists or supporters,” the lawsuit says. “The leaders of BLM and Defendants, not only, incited the violence against police in retaliation for the death of black men shot by police, but also did nothing to dissuade the ongoing violence and injury to police. In fact, they justified the violence as necessary to the movement and war.”

The lawsuit names Black Lives Matter leaders of varying rank within the activist group as well as the group itself. They include Deray McKesson, of Maryland; Johnetta Elzie, of Missouri; Alicia Garza, of California; Patrisse Cullors, of California; and Opal Tometi, of New York.

According to the complaint, the group organized several protests across the country in the days after Sterling’s death. Some of the demonstrations involved blocking highways and ended with demonstrators throwing objects at police in riot gear or other unruly acts.

Ten days before Long’s ambush was another ambush attack on police officers in Dallas. A lone gunman opened fire on men in uniform during a peaceful protest of the Sterling shooting and the death of Philando Castile, a black man in Minnesota killed by a police officer as he reached for his wallet during a traffic stop. The lawsuit claims the group’s leadership failed to condemn violence on police and instead incited it.

Long, the gunman, was allegedly inspired by the Dallas shooting, the lawsuit says. Following the shooting, the 29-year-old former Marine posted a video to social media applauding the Dallas attack, according to reports.

In the ambush, Smith was shot through his abdomen, his left shoulder and the left side of his head, the lawsuit says. Although he has had multiple surgeries, he still routinely suffers from infection and has damaged brain function.

While the lawsuit does not identify a direct link between Long and Black Lives Matter, it does reference attacks referred to as “Summer of Chaos” and “Weekend of Rage,” which were allegedly orchestrated by Black Lives Matter through social media. Though, those events have been debunked by fact-checkers and attributed to alt-right political memes and conspiracy theorists.

Smith’s lawsuit is the second filed by an unnamed Baton Rouge police officer and attorney Donna Groder against Black Lives Matter. In the first case, the group has asked the court for a dismissal, arguing it is a social movement and not an organization, so it cannot be sued, according to reports.