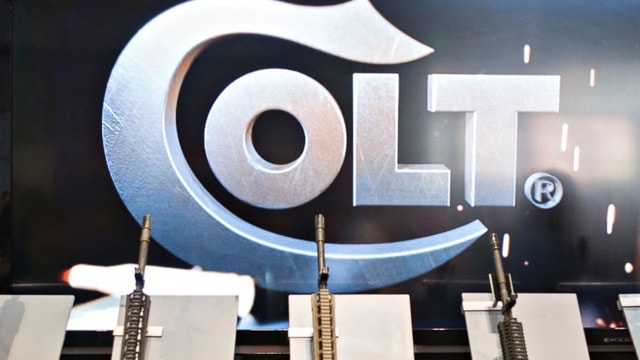 Colt’s screenshot of the alleged trademark violation. Ajax posted the image to its Facebook page in July 2016. (Photo: Colt/Pacer)

Colt’s Manufacturing filed a trademark dispute against Texas-based Ajax Grips for using its iconic symbol of a “colt rampant carrying parts of a spear in its mouth” on imitation pearl grips without permission.

According to the complaint, Colt issued a cease and desist letter in April, but Ajax failed to comply with the company’s demands. The complaint also includes screenshots of webpages showing the Ajax product for sale.

The 170-year-old Colt filed the trademark in 1905 and obtained more trademarks on iterations of the design in later decades. The most recent edition was filed in 2007, the lawsuit says.

The initial patent describes the symbol as “the word ‘Colt’ above the representation of a colt rampant carrying parts of a spear in its mouth and parts of a spear between its fore legs, the whole inclosed in a circular panel.” Yet, the company had been using that particular design since 1893.

The Connecticut gun maker has asked the court for damages allowed by law and decided by the court as well as reimbursement for lost revenue and attorneys fees.