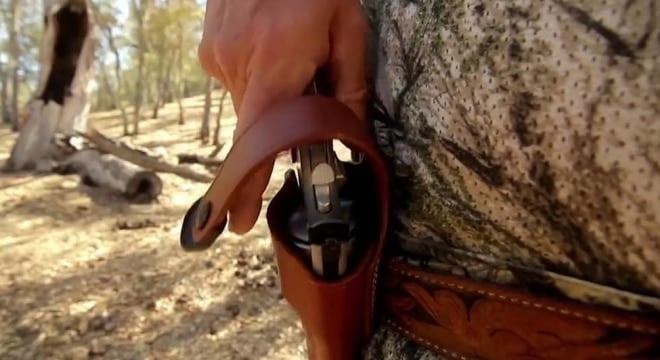 With narrow exceptions for target shooting, hunting, and fishing, Florida is one of just five states that ban the open carry of firearms (Photo: Smith and Wesson)

A challenge to the Florida law preventing the carry of firearms openly was filed with the nation’s high court this week.

The case comes as an appeal of a 2012 second-degree misdemeanor conviction of Dale Lee Norman, 26, who was found guilty by a succession of lower courts for Open Carrying of a Weapon outside of his home when his shirt did not cover the handgun for which he had a concealed carry permit.

The 49-page petition argues Florida’s ban is unconstitutional as concealed carry in the state is a licensed privilege, and does meet the right to keep and bear arms protected under the Second Amendment.

“At issue in this case is whether that guarantee protects the right to carry firearms in public for self-defense,” the petition says. “Neither party disputes that the issue is one of national importance or that the courts of appeals have already weighed in extensively.”

The state is one of only five that ban almost all open carry, with limited exceptions while hunting or fishing. The Florida Supreme Court weighed in on Norman’s case and held 4-2 earlier this year that the prohibition does not infringe on the Second Amendment as it only regulates only one manner of bearing arms — leaving open to Floridians who want to carry outside of their property the prospect of obtaining a concealed carry permit.

Second-degree misdemeanors in Florida, which Norman was appealing, are punishable by up to 60 days in jail and a fine of up to $500. Represented by the gun rights group Florida Carry, Norman lost an appeal of his case in 2015 with a lower court citing the that in Florida, with a population of some 19 million has over 1.5 million concealed handgun licenses active through its shall-issue permitting scheme, obtaining a permit to carry is a straightforward process.

Efforts to legislate legal open carry protections, with the support of the National Rifle Association, have been sidelined in the Florida legislature for the past several sessions.

The case is represented at the court by Stephen Halbrook, a noted gun rights attorney who has been tied to a number of high-profile Second Amendment challenges in past years. If accepted, it would be the first right to carry case to be heard since 2010’s McDonald v. City of Chicago, with the court rejecting numerous other appeals since then.