Former Tucson cop gets 6.5 years for trafficking guns to Mexico 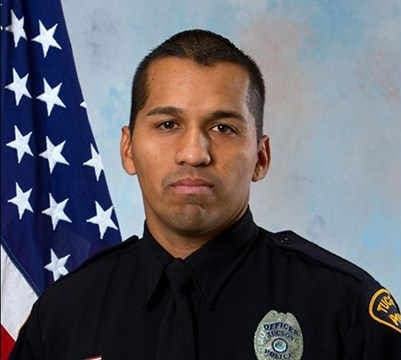 Joe Santiago Valles served the Tucson Police Department from 2012 through 2014 when he resigned, according to reports. (Photo: Tucson Police/AP)

A federal judge sentenced a former Tucson police officer to 78 months in prison for a host of charges connected to illegally selling firearms, the Justice Department announced over the weekend.

Valles was a business partner with Federal Firearms Licensee Timothy Veninga, doing business as Ballistic Firearms, in Tucson, the Justice Department said. Together, they submitted ATF forms to transfer guns using phony names to conceal the identities of the actual buyers. From October 2015 to April 2016, they transferred 35 firearms, including 24 semi-auto pistols and rifles.

One of the firearms was intercepted by U.S. Customs and Border Patrol on its way into Mexico, and Mexican authorities recovered a second firearm, a .50-caliber rifle, the Justice Department said.

Prosecutors say soldiers with the Mexican military in September 2016 stopped five men in Sinoaloa, Mexico, as they disembarked an airplane carrying long guns. Altogether, authorities seized eight firearms and a stash of Mexican pesos valued at $38,000 USD. One of the weapons was a Barrett .50-caliber rifle Model 82 with an obliterated serial number.

Mexican authorities contacted an ATF attaché to examine the firearm. Agents recovered the serial number and traced it back to Ballistic Firearms. When investigators interviewed Veninga, they noticed a number of .50-caliber rifles and that the one recovered in Mexico was sold to Eduardo Romero, one of the names used to falsify transaction records.

According to court documents, Valles and Veninga would use identities of individuals without their knowing to complete and sign ATF background check forms. As an FFL, Veninga maintained records of the transactions. However, he also destroyed them.

The two men went so far to conceal illegal activity as to stage a robbery. According to court documents, Veninga reported to local authorities that a masked robber bound him and threatened him at gunpoint for his FFL records. However, the incident did not occur.