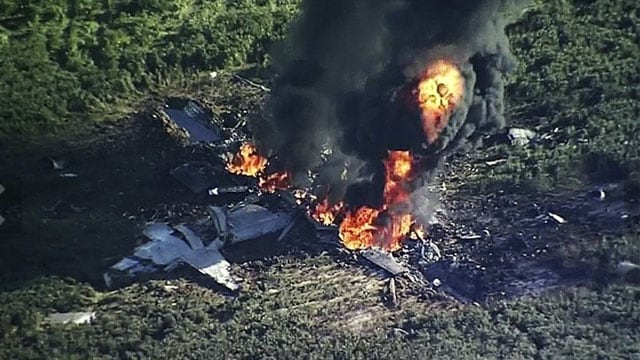 Local residents described the tragedy as sounding like a thunderstorm, with several explosions. (Photo: Associated Press)

Officials are investigating the circumstances surrounding a fiery plane crash and explosion Monday afternoon outside of Itta Bena, Mississippi, that claimed the lives of all 16 Marines aboard.

The United States Marine Corps confirmed in a press release the crew and passengers, which consisted of 15 Marines and one Navy Corpsman, were all killed. None of their names have been released, pending notification of next of kin.

Monday’s tragedy is said to be the worst aircraft disaster for the Marine Corps since 2005.

Officials confirmed the aircraft involved was a KC-130T from Marine Aerial Refueling and Transport Squadron (VMGR) 452, Marine Air Group-49, 4th Marine Aircraft Wing, Marine Forces Reserve. At the time of the crash, the plane was transporting personnel and equipment to the Naval Air Field in El Centro, California, from the Marine Corps Air Station in Cherry Point, North Carolina.

Aboard the aircraft was small arms ammunition and personal weapons.

Local catfish farmer Will Nobile described the crash as sounding like a big thunderstorm with several explosions. He said he walked outside only to witness a falling gray streak then rising black smoke.

Nobile said he drove toward the wreckage site and when he looked up into the sky, he saw what appeared to be a parachute falling.

“It didn’t look like anybody was in it,” he recalled.

Andy Jones, who is also a local catfish farmer, said he was outside working when he heard a loud boom.

“You looked up and you saw the plane twirling around. It was spinning down,” Jones told the Associated Press.

Soon after, Jones said a passerby stopped to borrow his cellphone to report that there were bodies on the highway more than a mile from the wreckage site.

“While the details of the incident are being investigated, our focus remains on providing the necessary resources and support to the family and friends of these service members as they go through this extremely difficult time,” the Marine Corps said in a press release.

Mississippi Gov. Phil Bryant asked for prayers for those affected by the tragedy.

“On behalf of the entire Marine Corps, I want to express my deepest condolences to the families of those killed in the aircraft mishap yesterday afternoon in Mississippi. Please keep the families of our 16 fallen service members in your thoughts and prayers. Our focus remains on notifying and supporting the families while we conduct a thorough investigation into the cause of this tragedy,” Commandant of the Marine Corps Gen. Robert Neller said in a statement.

President Donald Trump and the First Lady called the tragedy “heartbreaking” as they expressed condolences.

Bryant also warned against anyone attempting to take items from the wreckage sites, promising swift prosecutions for those who would do so. Additionally, Bryant urged anyone who comes across items that may be part of the wreckage to promptly contact authorities.