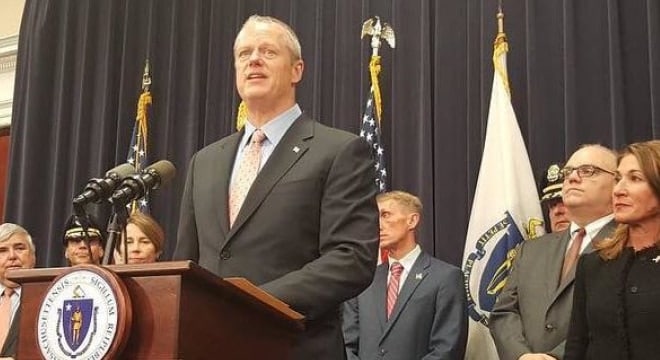 Republican Gov. Charlie Baker has appointed the president of the Massachusetts National Rifle Association affiliate to be commissioner of the Department of Fish and Game.

Ronald Amidon was announced as the head of the $27 million state department that manages fish and wildlife resources by Massachusetts Energy and Environmental Affairs Secretary Matthew Beaton last week, replacing outgoing Commissioner George Peterson. In addition to a career in construction management, Amidon is president of the Gun Owners Action League, the state’s NRA organ.

“Ron knows the Commonwealth’s fisheries and wildlife as well as land protection responsibilities, and I look forward to working with him to continue the Baker-Polito Administration’s support of the Commonwealth’s wildlife, open spaces, and outdoor educational programs,” Beaton said in a statement.

The department is responsible for fisheries and wildlife management as well as ecological restoration and boating access. As such, it oversees funding for a wide scope of outdoor projects ranging from wildlife research to the administration of fish hatcheries, hunters’ education programs and the purchase of land for use as an animal refuge.

Amidon, 62, who is also active in Ducks Unlimited, Trout Unlimited and local organizations such as the Otter River Sportsman’s Club and Worcester County League of Sportsmen, told the Worcester Telegram that his appointment came as a surprise but that he sees it as an opportunity to work with people he had long admired.

“Most of the folks that know me know I am a sportsman and conservationist first and foremost,” Amidon said.

However, Newton Mayor Setti Warren, a Democrat running for governor who has long championed gun control, said Amidon’s appointment is a reward for the NRA at a time when Gov. Baker is sparring with Attorney General Maura Healey over gun laws.

“We should be focused on making our communities safer, not rewarding the people who think we need more guns on our streets,” said Warren, who is a member of former New York Mayor Michael Bloomberg’ Mayors Against Illegal Guns organization.

GOAL is currently involved in a federal lawsuit against Healey over her interpretation of what firearms are banned under Commonwealth law. The gun rights group has also been vocal in urging state lawmakers to move toward lifting Massachusetts’ statewide ban on Sunday hunting.

Even with the shade from Warren, Amidon enjoys the support of some powerful Democrats including state Sen. Anne Gobi, who chairs the Joint Committee on Environment, Natural Resources and Agriculture.

“I have known Ron for 15 years and his reasoned and ethical approach to dealing with issues and his absolute love of the outdoors will serve not only the sportsmen and women but all in the Commonwealth,” Gobi said.