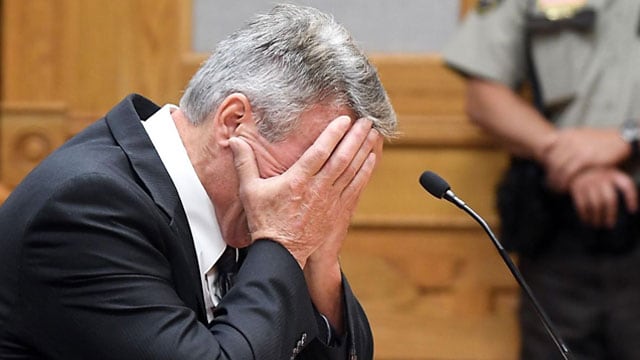 David Allen Pettersen, who fatally shot a teen burglar, breaks down in court as a reads a statement during his sentencing. (Photo: Mankato Free Press)

A Minnesota farmer who interrupted a burglary in progress at his rural Madelia home earlier this year was sentenced in Watonwan District Court Tuesday to 90 days in jail for the fatal shooting of a 19-year-old suspect.

David Allen Pettersen, 65, opened fire on three teens with a .45-caliber handgun after they attempted to break into his home on Jan. 28. Nicolas Thomas Embertson, 19, was struck by the gunfire and died not far from the scene.

Pettersen, who originally faced second-degree manslaughter, pleaded guilty to intentional discharge of a dangerous weapon, which is a felony. The manslaughter charge was dropped as part of a plea deal, but Pettersen will still be required to complete two years of supervised release and 100 hours of community service, according to reports from local media.

The shooting unfolded after Pettersen awakened to the sound of someone on the balcony outside of his bedroom around 7 a.m. When he looked through a window, Pettersen saw Embertsen’s accomplice, 18-year-old Kyle Thomas Nason.

Nason jumped from the balcony, while Pettersen retrieved his gun and ran to the front door.

Before Pettersen got outside, Nason, Embertson, and a third suspect, 18-year-old Cornelius Ayers Jr., were in the getaway car attempting to leave. Pettersen said he feared for his life when he pulled the trigger because he felt it was “obvious” the driver of the vehicle, Embertson, was trying to run him over.

Pettersen said he tried to shoot out the tires in an attempt to stop the vehicle, but struck Embertson in the process. The teen lost consciousness while driving not far from Pettersen’s home, and was pronounced dead at the scene.

Embertson’s family, who noted the trio never entered Pettersen’s home, said the teen was not a threat and his death sentence was unwarranted. In retrospect, Pettersen said he wishes he would have called 911 first, but also noted the actions of the teens put him in the position to make a choice.

Judge Gregory Anderson said he believes Pettersen is remorseful and does not perceive him as a threat to public safety, but feels “he acted out of fear and maybe some stupidity.”

Pettersen read a statement in court, saying he took no satisfaction in Embertson’s death.

“I will carry that awful responsibility with me for the rest of my life,” he said as he was overcome with emotion.

Last month, Ayers, who admitted the trio was trying to break into Pettersen’s home, was sentenced to 15 days in jail. Nason, who broke his ankle trying to escape, denied that burglary was their intent. He was given 45 days after entering an Alford plea, which does not admit guilt but acknowledges sufficient evidence for a conviction.

As a convicted felon, Pettersen will no longer be allowed to legally own a firearm.