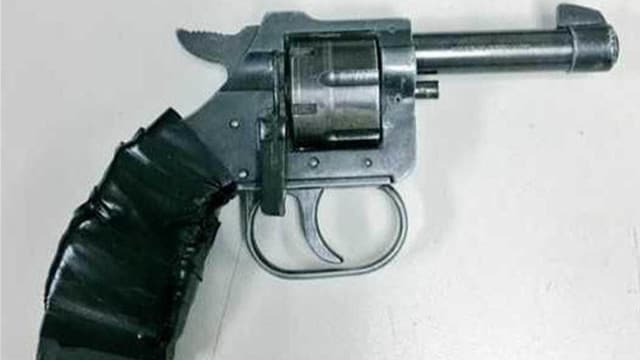 Chicago police say this gun was taken from a 12-year-old boy on July 11 on the city’s West Side. (Photo: Chicago Police Department)

A 12-year-old boy was arrested with a gun on Chicago’s West Side Tuesday night, marking at least the third report of armed children on the city’s streets in recent weeks.

Responding to a call of a person with a gun, officers arrested the boy in the city’s Lawndale neighborhood. He’s being charged as a juvenile with unlawful use of a weapon, according to the Chicago Tribune.

Last weekend, Chicago police issued a community alert about a string of robberies in the city’s Bronzeville neighborhood, just south of the Loop. Between three and nine offenders committed about a dozen robberies throughout the area last month.

“In the most recent incident, occurring on June 29th, a reported six to eight-year-old black male offender displayed a silver handgun and demanded money,” said the alert from police.

That boy remains at large, as are the rest of the offenders in those incidents, who range in age from 6 to 20.

Also last weekend, a video surfaced on Facebook of a boy carrying what appeared to be a gun in his jacket pocket. At first, police thought that boy might have been involved in the Bronzeville robberies. But they later identified the boy, and determined the gun in his pocket was fake “with an orange rubber tip.”

“Anybody who watched this video would have made the assumption it was a real gun,’’ said CPD spokesman Anthony Guglielmi.

Two other boys, aged 9 and 10, were involved in the video. Charges are not expected to be filed in connection with that incident.

The boy arrested with a handgun in Lawndale Tuesday night told officers he was a gang member. Police Superintendent Eddie Johnson said the boy’s age is concerning.

“We are failing our children and, as a result, street gangs are taking the place where parents should be,” he said.