Former Anheuser-Busch CEO had pills, loaded guns in helicopter when police stopped him 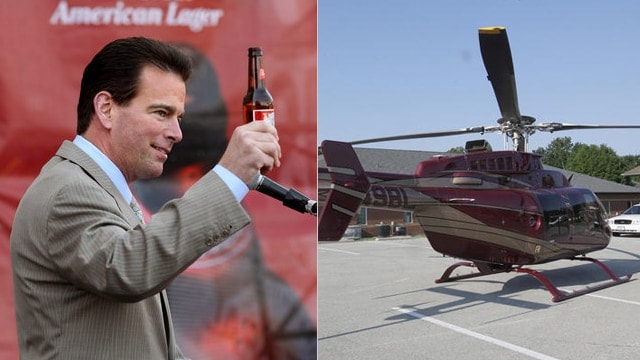 Former Anheuser-Busch CEO August Adolphus Busch IV had eight dogs, several prescription drugs, and four loaded guns in his helicopter earlier this week when officers prevented him and his wife from taking off.

It happened in the parking lot of an office building in Swansea, Illinois, on Monday, according to the Chicago Tribune.

Someone called police to report that an “intoxicated male was getting into the helicopter and attempting to fly away.” When police arrived, Busch powered down the chopper and spoke with police, according to court documents.

When Busch took a breathalyzer, it came back .000 for alcohol, and police told him he was free to go. But instead of leaving, he started “rambling.”

“Taking the totality of circumstances into consideration, I believed (Busch) could be under the influence of a controlled substance. I advised (Busch) he was no longer allowed to get into his helicopter and fly away,” Frank wrote.

That’s when Busch told the officers that he had a Rohrbaugh R9 9mm handgun. As Frank removed the weapon from Busch’s pants pocket, Busch told him it was “hot.”

Frank put the gun inside the helicopter, where Busch’s wife was still sitting. Police found four prescription bottles in the chopper — Alprazolam, better known as Xanax, and Clonazepam — both tranquilizers. Both medications were prescribed to Busch. Two others were prescribed to his wife.

During the interaction with police, Busch told them he was having an anxiety attack. He started jumping up and down and running sprints.

When officers searched the helicopter, they also found pepper spray, a Ruger .22, a Ruger .357 Magnum, and a Glock .357 — all of them loaded. Busch was given a second field sobriety test and was eventually arrested.

He had to give blood and urine samples at a nearby hospital, but hasn’t been charged with a crime. Busch is certified to fly airplanes and helicopters.

In January, he was involved in an altercation at a bank in Florida. A man confronted him, claiming his car was blocking the ATM. Busch allegedly pulled out a licensed handgun during the incident. He kept it pointed at the ground, and was not charged.