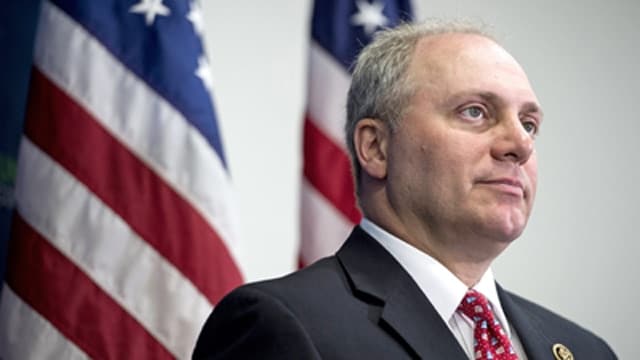 The update came from a source familiar with the Louisiana congressman’s condition who declined identification.

Scalise and four others were shot June 14 at a baseball field in the Del Ray neighborhood of Alexandria, Virginia, about 10 miles outside of the capitol.

The congressman and about two dozen other Republican lawmakers and staffers had gathered that morning for one last practice ahead of the annual charity Congressional Baseball Game scheduled the following day when a deranged gunman opened fire on the field, striking Scalise, Special Agents Crystal Griner and David Bailey, Republican aide Zach Barth and Tyson Foods lobbyist Matt Mika.

The shooter, 66-year-old James Hodgkinson, died later the same day at a Washington-area hospital after a shootout with Griner, Bailey and the Alexandria Police Department.

The officers, Barth and Mika have all been released from the hospital since the shooting.

House Majority Leader Kevin McCarthy told Fox and Friends Tuesday he last saw Scalise on July 4 and the most recent complication didn’t come as much of a surprise to him.

“I was at the hospital the day of the shooting. I was with the doctor,” he said. “The doctor told me … it’s not if, it’s when Steve will get an infection.”

Staff at the Medstar Washington Hospital Center readmitted Scalise to the ICU July 5. The latest update, provided July 6, says the congressman remains in recovery after undergoing a fourth surgery to treat the infection.

McCarthy said he received word Monday of Scalise’s condition. “He was doing better, and that’s what we’re fighting and working though today,” he said. “He looks so much better, he was back to finally eating any food that he wanted so he was feeling better.”