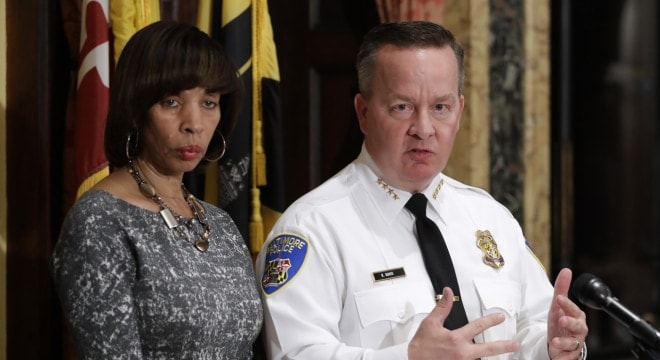 Mayor Catherine Pugh and city leaders want to establish a mandatory minimum sentence for those found with handguns near Baltimore schools, parks and other public buildings.

A city ordinance written by Pugh’s office is expected to be introduced to the City Council next week that would mandate a one-year sentence without parole or probation for some found with handguns in Baltimore, WMAR reported. The move already has the support of some lawmakers on the all-Democrat Council.

“We need to do something and this is a great step in the right direction,” Councilman Eric Costello said. “Public safety is the number one priority in the city right now.”

The language of the measure would criminalize the carry or transport of a handgun, either openly or concealed, within 100 yards of a public building, park, church, school, or “other place of public assembly” with a mandatory penalty of one-year imprisonment and a $1,000 fine. Exemptions to the misdemeanor would default to state law, which allows for carrying by police, military, those with a carry permit, or those transporting a firearm for a reason such as to a gun range, gunsmith, hunting or shooting sports event.

The effort comes as the city is suffering from a record high murder rate — with over 180 killed so far this year — a figure reportedly higher than larger urban centers such as New York and Philadelphia and more than twice as many as Chicago.

Pugh has taken to local media this week speaking to her administration’s “violence reduction strategy” that aims at tackling crime in conjunction with community engagement while working with state and federal law enforcement for additional resources. Baltimore was chosen in May for the nationwide debut of a mobile gun tracing vehicle rolled out by the Bureau of Alcohol, Tobacco, Firearms, and Explosives, which was termed a “game changer” in investigating gun crime.

Gov. Larry Hogan, R, met with Pugh this week to talk about the city’s crime issue, reportedly exploring options to include expanding state police patrols and legislation to make it a felony to carry illegal guns in Baltimore.