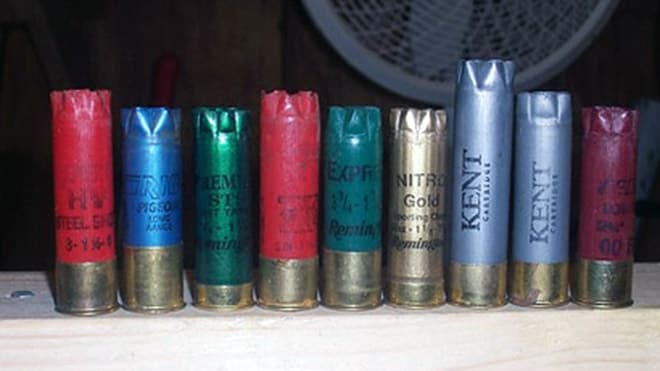 Unlike cooking up a metallic cartridge load from what’s in your pantry, different rules serve for shotshell loads, namely, no substitutions.

As I’ve noted in prior articles, metallic cartridge handloaders have it easy compared to us shotshell reloaders. One of the reasons for this is the fact that, in most cases, components for rifle and handgun loads are largely interchangeable. Allow me to elaborate:

Let’s assume, for instance, you want to churn out 100 or so rounds for your favorite .357 magnum revolver. You’re low on funds at the moment, so you need to make do with the components you happen to have on hand. On your bench is a box of Hornady, 158 grain XTP bullets, a healthy supply of CCI 550 small pistol magnum primers, and half a jar of Alliant Unique. Your brass has been scavenged from under the benches of your local range over the course of a few years and is of mixed manufacture.

You peruse your loading manuals and find data that employs 158 grain XTP bullets and Unique powder, but that data calls for Winchester small pistol Magnum primers and Starline cases (most of your scavenged cases are Remington). What is the frugal handloader to do?

The solution for the metallic handloader in this situation is simple: work up a load. To work up a load using such an amalgamation of components, take the starting load listed in your data manual and reduce it by 5 to 10 percent. Load five rounds at that level, then increase the powder charge by one grain and load five more rounds. Continue to do this until you have reached the maximum load listed in your manual (or as close to maximum as you wish go). During your next range session, fire your handloads from weakest charge to strongest while paying attention for signs of high pressure. If one of your handloads results in a blown out primer, split case, or sticky bolt, the load is too hot.

While not all metallic loading components are interchangeable (you can’t safely switch powder types or bullet weights on a whim) for the most part, a 158 grain jacketed .357 bullet, a small pistol Magnum primer is a small pistol Magnum primer, and a case is a case. With a little care, diligence, and work, you can probably get a decent and safe handload out of the components you have on hand.

Unfortunately, the same is not true for shotshell handloading. Those who apply metallic loading rules to scattergun loading are gambling with their eyes, fingers, and possibly lives.

When I first began shotshell handloading, I had already been loading up my own rifle and handgun rounds for several years. Naturally – and perhaps foolishly – I took the same approach to shotshell loading as I did to metallic cartridge loading. If load data called for Winchester AA hulls and I didn’t have any on hand, no big deal. I simply subbed in the Fiocci hulls of which I had hundreds. If a load called for Cheddite primers and I only had Winchester primers, I assumed it was all pretty much the same. I assumed that the warnings printed in loading manuals telling the reader not to substitute components were just there for liability purposes.

Thinking back, I sometimes break into a cold sweat realizing how lucky I am to still have the digits required to type this article.

It wasn’t until I started conversing on the topic via online forums with more experienced handloaders that I realized I was quite literally playing with fire. I learned that not only can component substitution in a shotshell cause pressure spikes, but also that the first sign of excessive pressure in a shotgun can be when the thing explodes in your hands. Unlike with a metallic cartridge load, you can’t simply switch out a component or two, back off the charge, and be aware of a sticky bolt or blown out primer.

According to page 84 of the Advantages Manual, Fifth Edition, published by Ballistic Products Inc. variations in tolerances of components between manufacturers is what can lead to pressure spikes in hodgepodge loads.

“You cannot safely substitute components or change ingredient ratios of shotshell recipes. Primers, propellant, pellet payloads, wads, and even hulls are carefully matched for a given recipe… a simple change in the gas seal of a wad or the plastic of a hull can easily make the load unsafe.”

The only slight exception to the above is that shot size can be varied as long as the overall payload weight and type of metal the shot is made of remains the same. To clarify, if your load data calls for a 1 ounce payload of lead #8 shot and all you have is lead #7.5 shot, go for it. However, there is an exception to this exception. Attempting to substitute large pellets (such as buckshot) into data designed for birdshot may make a load impossible to crimp.

What does all this mean for the would-be shotshell handloader entering the game for the first time? It means that before you purchase any hulls, primers, powder, or shot, you she should first invest in a good set of data manuals, or at the very least peruse the data offered for free online by various component manufacturers (not random forums). Next, decide what kind of load or loads you want to make, and based on published data, order the ingredients you need.

Ultimately, shotshell reloading is like baking a cake. Stick to the recipe and pay close attention to what you’re doing and you’ll get a delicious dessert. Improvise, and the results could be ugly.