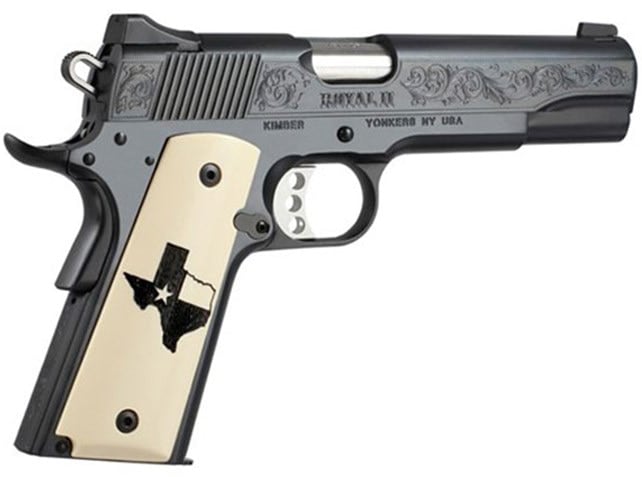 While Texans may prefer their salsa be made in more regional areas than places like New York City, they may be ok with pistols coming from The Empire State.

Kimber will produce 800 pistols in the design, equipped with a unique serial range beginning with the prefix “TXEB.” The company will use its Royal II 1911 handgun design featuring a deep black oxide finish with high polished flats on the slide as well as scroll engraving accented with a western leaf. The 1835 motto “Come and Take It” will appear on the left ivory grip and the “Lone Star Flag” will grace the right grip.

Kimber spokesman Winslow Potter called the handgun “the perfect ‘black hat’ answer” to a previous limited edition Texas model released in 2015. “Whether you’re looking to make a statement at an upcoming barbeque, round out your collection, or utilize the proven 1911 design for personal protection, the new Texas Edition pistol will not disappoint!” he said.

Other features include a five-inch barrel, 38-ounce weight and .45 ACP chambering. The Texas Edition 1911 will be available at Kimber Master Dealer locations across America in the coming weeks. The suggested retail price is $1,633.