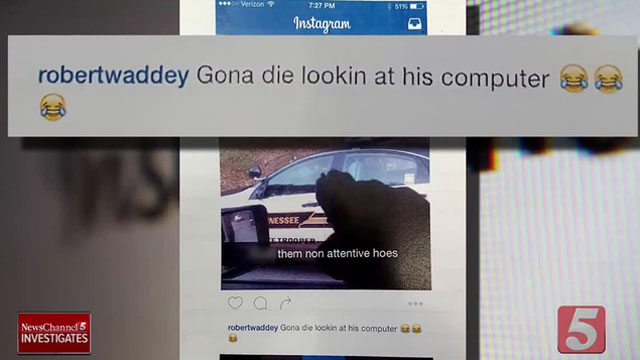 Robert Ellis Waddey is charged with communicating a threat by interstate commerce, as well as being an unlawful user of a controlled substance in possession of firearms. He faces up to five years in prison and a $250,000 fine. He is due to be sentenced in October.

According to an indictment returned in February, Waddey created a number of threatening photos, including one posted to Instagram that shows a handgun aimed at a Tennessee State Trooper vehicle with the captions, “F*ck them non attentive hoes” and “Gona die lookin at his computer.”

One text message talked about Waddey’s recent trip to the firing range and ending with him calling his AK a “pig slayer.” Other text messages discussed getting high on “coke” or “molly.”

One photo showed a uniformed police officer bleeding profusely from head trauma, with the caption “only a dead cop is a good cop.” Another photo looked to be a screen shot from a video showing an officer lying on the ground bleeding from what appears to be multiple gunshot wounds, with the caption, “ON TAPE: OFFICER SHOT IN THE HEAD D….”

During the investigation, authorities seized 13 handguns, four assault rifles and a shotgun from Waddey.

“The U.S. Attorney’s Office will continue to review every threat and act of violence against our law enforcement officers,” said Acting U.S. Attorney Jack Smith. “If the review finds that federal law was violated, you should expect to see federal charges brought against those responsible.”