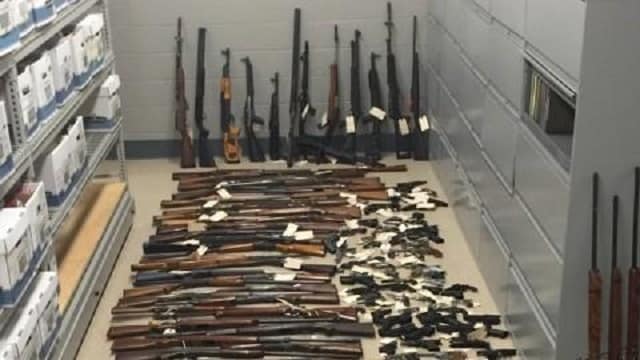 A record number of 207 guns were turned in at a Hartford gun buyback event held on Saturday, July 15. (Photo: Hartford Courant)

A gun buyback held in Hartford, Connecticut, netted a total of 207 firearms Saturday, said to be a record number for the event.

The total number or firearms handed over included 35 rifles, 60 pistols, and 40 shotguns, the Hartford Courant reported. Hartford Police Sgt. Steve Austin said the guns will be dismantled and turned into gardening tools, with the help of the Newtown Action Alliance.

“Generally, the public is becoming more receptive to our efforts,” Austin said. “I think they’re starting to see the value in these gun buybacks, and the number of people who attended today is indicative of that.”

The event was held at the Johnson Stewart Community center and was the result of a collaboration between police, Mothers United Against Violence, St. Francis Hospital and Medical Center, and the Compass Youth Collaborative.

Gift cards of various denominations were given out in exchange for the firearms, and $32,000 worth of IOUs had to be given out to later attendees.

Austin noted that children also attended a gun awareness program held at the event in which they were instructed to tell someone right away if they come across a firearm.