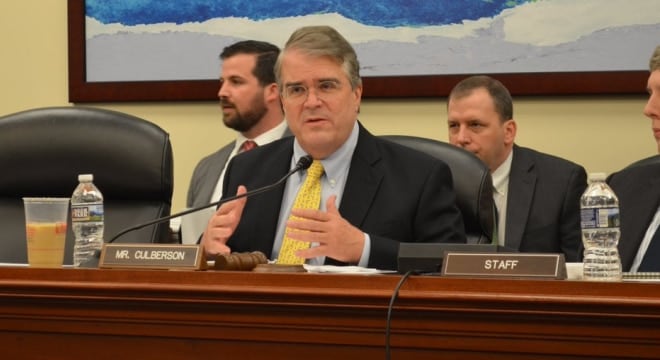 While gun control groups welcomed the prospect the nation’s gun regulatory agency would get more money than last year, they balked at pro-Second Amendment riders trimming the agency’s reach.

The House Appropriations Committee on Thursday approved the Fiscal Year 2018 Commerce, Justice, Science Appropriations bill 31-21. Among the $54 billion in discretionary funding greenlighted was $73 million for the FBI’s National Instant Criminal Background Check System — in line with 2017s budget — and $1.3 billion for the Bureau of Alcohol, Tobacco, Firearms and Explosives, a $35 million bump from last year’s funded level.

“This bill balances my two top priorities; being frugal with my constituents’ hard-earned tax dollars, while supporting federal law enforcement and scientific agencies with the resources they need to do their job,” said CJS Subcommittee Chairman, U.S. Rep. John Culberson, R-Texas, in a statement. “This legislation makes sure that America’s law enforcement agencies have enough money to effectively fight 21st century threats like cybercrime, terrorism and human trafficking.”

Included in the 102-page bill, now headed to the House floor, are modest funding jumps for the FBI (up $48 million), DEA (up $98 million), Marshals Service ($82 million) and ATF ($35 million), though the nation’s gun watchdog has its money tied to a number of provisions. These easing import applications on shotguns for sporting purposes and the importation of “curios and relic” firearms; allowing easier export of firearms to Canada; and a prohibition on the ATF’s longstanding policy of tracking multiple firearms sales made through licensed dealers in border states. In further gun policy moves, the none of the funds authorized can go towards implementation of the yet-to-be ratified UN Arms Trade Treaty.

While gun control groups welcomed the news of ATF’s spending increase, along with $215 million in grants to combat violence against women, they took exception to the riders trimming the agency’s authority.

Americans for Responsible Solutions issued a statement arguing that ending the multiple firearm reporting program would make it “easier for gun traffickers to buy certain semiautomatic rifles, which are preferred by the Mexican drug cartels,” while easing restrictions on the import of certain shotguns and relic firearms made before 1967 would allow dangerous guns to arrive from overseas “potentially ending up the in the hands of criminals.”

On the other side of the spectrum, the National Rifle Association praised passage out of committee of what they termed overall a “pro-gun” spending bill, going on to note that Culberson is an “NRA A+ rated pro-gun champion.”

“Under Culberson’s leadership, a number of provisions in this year’s CJS appropriations bill help to undo the damage inflicted on the right to keep and bear arms under the Obama administration and which Obama loyalists remaining in government are only too happy to continue,” said the NRA’s Institute for Legislative Action in a statement.