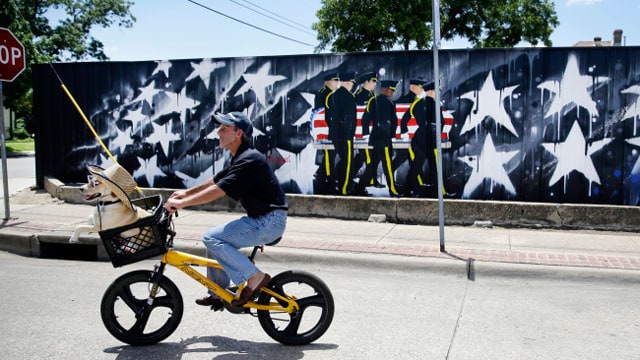 A Dallas business owner is expressing frustration after he was issued a citation by the city over a police memorial outside of his downtown business.

City officials said the memorial violated city code and must either be taken down or modified. Officials noted safety concerns over the mural, which is painted on an 8-foot metal fence and pays tribute to the five officers killed in an ambush attack on July 7, 2016, because it blocks visibility at the intersection.

In order to stay standing, Cesar Rodriguez, who runs the Last Call Lounge where the memorial is located, had to obtain a permit from the city, but was also required to move it back three feet, at a cost of more than $2,000 on top of the initial $15,000 it cost to construct. Rodriguez applied for the permit and moved the memorial, but was left frustrated by the experience.

“I’m frustrated because we tried to do something for the police department. We tried to make the neighborhood look a little bit better,” Rodriguez said. “We feel a little bit sad that we’re doing all this for our city and they don’t see or appreciate that.”

Although Rodriguez paid to have the memorial moved, it has yet to be inspected, so it’s unclear if it now complies with the city code.