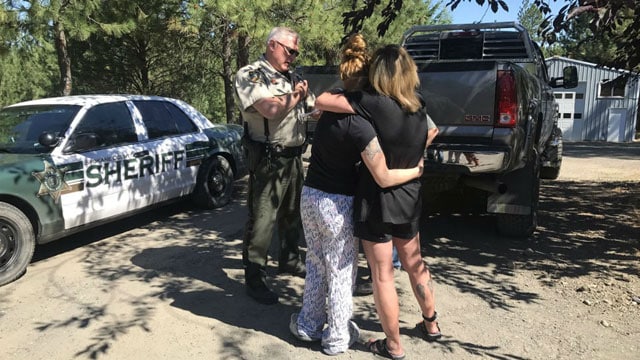 Seventeen-year-old Kimber Wood, still in her pajamas after being awakened by an intruder, talks with a deputy outside of her home Monday. (Photo: KHQ)

A 17-year-old girl came face-to-face with a wanted fugitive inside her Spokane County home early Monday morning, but the suspect was promptly scared away when the girl pulled a gun on him.

Kimber Wood told reporters she fired a single shot during the encounter, but only aimed to scare, not strike the suspect.

The incident unfolded around 5 a.m. after deputies attempted to pull over a car which was previously reported stolen. The driver of the vehicle led officers on a pursuit before ditching the stolen vehicle and fleeing on foot.

Authorities then set up a perimeter in an attempt to capture the suspect and local news station KHQ showed up at the scene in order to share details with residents during the news station’s morning show.

Kimber, was asleep and home alone at the time, but her parents and boyfriend both saw the news broadcast and contacted her to alert her of a fugitive on the run in her neighborhood. Kimber asked her father’s permission to keep his gun nearby, which he granted without hesitation. So Kimber tucked the gun under her pillow and went back to sleep.

A short time later, however, Kimber was awakened by the sound of someone in her house, so she retrieved the weapon and positioned herself behind a vanity in her bedroom. Moments later, the intruder – who was later confirmed to be the wanted fugitive – entered Kimber’s bedroom. She responded by pointing the pistol at him, asking who he was, and telling him to “get the (expletive)” out of her house.

According to Kimber, the suspect’s eyes became very big, and he promptly ran outside. The teen, noting that she did not want him to return, chased the suspect outside and fired a single shot into the ground.

The suspect fled, but not before stealing an ATV from the family’s property.

After deputies arrived at Kimber’s home, they showed her a picture of the fugitive, who she positively identified as the suspect who broke into her home. He is apparently known to local law enforcement, and, as of Monday afternoon, was still on the run.

Kimber’s father noted the teen’s proficiency with a firearm, even indicating her skills may be better than his.

“Lessons we went over and over, and you think they’ll never have to use them, and today proved that they did, and it worked,” he said.

One deputy on the scene said, even though the teen is not his daughter, he is very proud of her.