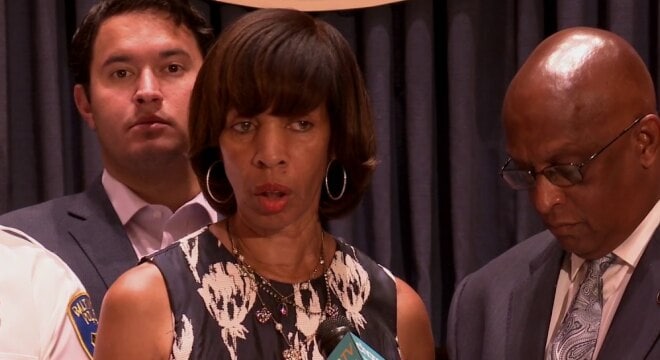 Baltimore Mayor Catherine Pugh and some city leaders are backing a measure to establish a mandatory minimum sentence for those found with handguns near Baltimore schools, parks and other public buildings, but are getting some push back. (Photo: mayor.baltimorecity.gov)

Mayor Catherine Pugh and about half the Baltimore City Council are in favor of a strict one-year sentence for those found with guns, but the other half may be a harder sell.

The proposed ordinance written by Pugh’s office would mandate a minimum sentence without parole or probation for some found with handguns near Baltimore schools, parks and other public buildings. However, as reported by the Baltimore Sun, Monday’s Council meeting found only seven of the 15 members support the idea and at least four vocally oppose it.

“This is not something that’s innovative,” said Councilman Kristerfer Burnett, speaking against the move.

The language of the measure would criminalize the carry or transport of a handgun, either openly or concealed, within 100 yards of a public building, park, church, school or “other place of public assembly” with a mandatory penalty of one-year imprisonment and a $1,000 fine. Exemptions to the misdemeanor would default to state law, which allows for carrying by police, military, those with a carry permit, or those transporting a firearm to a gun range, gunsmith, hunting or shooting sports event.

Adam Jackson, with the community group Leaders of a Beautiful Struggle, warns the proposal is a short-sighted approach to stemming violence in the city and will lead to unintended consequences.

“Mandatory minimums are a vestige of the failed war on drugs and perpetuate failed, feel-good ‘law and order’ policies instead of focusing political capital on proven crime prevention strategies such as investment in anti-violence programs, drug treatment, reentry and workforce development initiatives,” Jackson said in a statement.

In announcing the measure this week, Mayor Pugh, joined by Baltimore Police Department Commissioner Kevin Davis and other city leaders, argued the program will help in a city suffering from a record high murder rate — with over 180 killed so far this year.

“Gun offenders in Baltimore city know, or at least they think, they will not face a significant amount of jail time for their offense,” said Pugh. “So, we believe it’s time for us to put some stronger measures in place — especially as it relates to the possession of illegal guns, and to limit judicial discretion in suspending sentences of those who illegally possess guns in Baltimore city.”

A hearing on the bill is set for July 25.