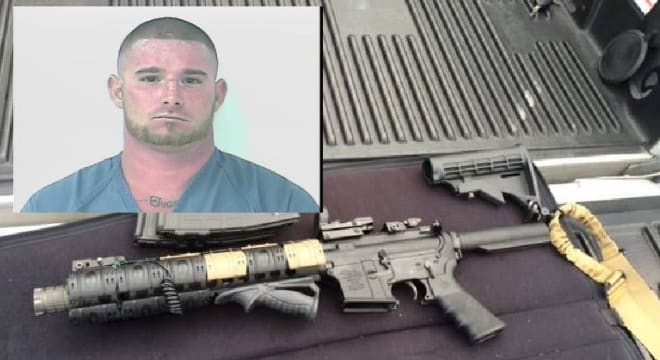 Chirco “told detectives he knew it was illegal and had even been banned from gun ranges because of it.” (Photo: St. Lucie County Sheriff’s Office)

Local deputy sheriffs in conjunction with agents from the Bureau of Alcohol, Tobacco, Firearms, and Explosives arrested a man after he knowingly listed an illegal SBR for sale online.

Taken into custody on Monday was Peter Chirco, 25, of Sebastian, by the St. Lucie County Sheriff’s Office, charged after an undercover buy of what authorities say is an illegal short barreled AR-15 style rifle.

“The gun was listed for sale online,” said the department in a statement, going on to note Chirco “told detectives he knew it was illegal and had even been banned from gun ranges because of it.”

According to his arrest report, deputies located what they felt was an SBR for sale on social media Monday and, after calling a contact that turned out to be Chirco, he agreed to meet at a Denny’s in Fort Pierce and sell the gun for $500. He said the rifle had been measured by someone at a gun range and told he couldn’t shoot it because the barrel was too short.

The rifle was checked by an ATF special agent at the scene of the buy who confirmed the gun was an illegal SBR under Florida law, which provides up to 15 years in prison and a potential fine of up to $10,000 for possession of a short-barreled rifle not possessed in compliance with federal statutes.

National Firearms Act violations prosecuted in federal courts are generally liable for up to 10 years in prison for each offense.

Chirco was booked St. Lucie County Jail and released early Tuesday on a $15,000 bond. It is unclear if he will be the subject of a subsequent federal indictment.