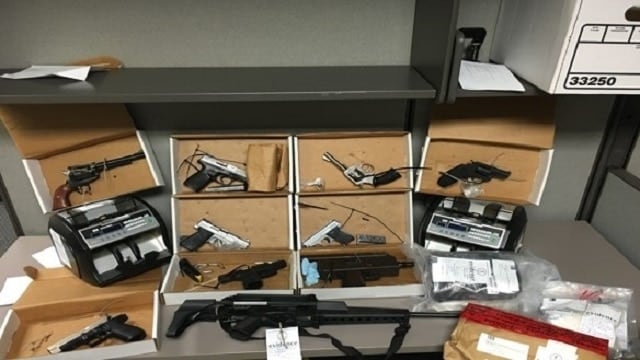 A Connecticut bail bondsman has been convicted of buying guns in Georgia and reselling them in his home state. (Photo: WJCL)

A bail bondsman hailing from Bridgeport, Connecticut, was convicted of firearms trafficking Tuesday and could face up to 10 years in prison.

The Connecticut Post reported 29-year-old Mark “Buddy” Williams entered a plea under the Alfred doctrine, meaning the man did not admit guilt but recognized prosecutors had sufficient evidence to prove he had bought guns in Georgia and illegally resold them in Connecticut.

After Williams entered the plea, Superior Court Judge Robert Devlin then found the man guilty and said he would consider the maximum sentence of 10 years.

Prosecutors said many of the guns Williams bought at Georgia gun shows were then sold in deals arranged by his wife, Venessa, at a Milford Panera Bread where she worked.

The number of guns sold and number and names of buyers are still under investigation. However, during one of the undercover buys conducted by police, Williams reportedly mentioned selling guns to members of the Bloods gang.

Williams is scheduled to be sentenced on Sept. 15.