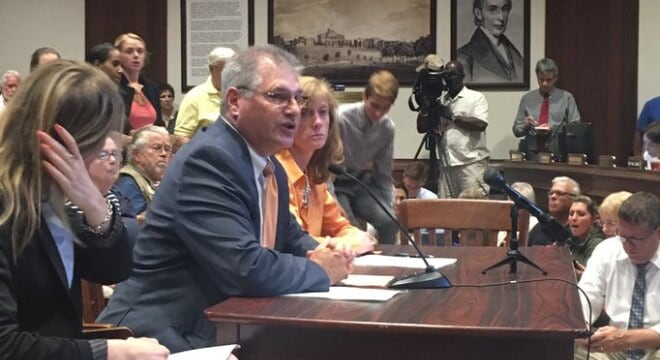 Massachusetts Rep. David Linsky joined with gun control groups this week to testify in favor of his bill to take firearms away from those deemed at risk. (Photo: Rep. Linsky)

More than 30 Democrats in the Massachusetts House are supporting a measure to authorize authorities to take guns away from those deemed a threat to themselves or others.

The proposal, H.3081, would allow family members, police, health care providers or prosecutors to request a judge issue an “extreme risk protective order” against individuals experiencing a crisis that may put themselves or others at risk. The measure would result in suspension of gun rights for up to a year.

The legislature in a joint committee hearing this week considered the bill. The bill’s author, Rep. David Linsky, D-Natick, along with gun control organizations presented it as part of Gun Violence Prevention Lobby Day. “Plain and simple, Extreme Risk Protective Orders save lives. Let’s make our Commonwealth’s gun laws even stronger by passing this bill,” Linsky said in a statement.

The proposal piggybacks on the state’s procedures for obtaining a domestic violence restraining order by allowing a relative to petition the court for an order preventing an at-risk individual from owning, purchasing, possessing, or receiving any firearms or ammo for a one-year period. The order can also be sought by law enforcement, a health care provider, or local prosecutor. However, the subject of an order could also petition to restore his or her gun rights.

The proposal is similar to California’s AB1014, which established a framework to deny firearm possession by those believed to be dangerous in the wake of 2014’s killing of six individuals near the University of California campus in Isla Vista. A similar program passed by ballot referendum last fall in Washington after a $3.5 million campaign by groups funded by former New York Mayor Michael Bloomberg.

“With this responsible legislation, Massachusetts has a real opportunity to help individuals in crisis who are at an elevated risk of injuring themselves or others and remove guns from dangerous situations,” said Allison Anderman, an attorney with the Law Center to Prevent Gun Violence.

“H.3081 would create two new protective orders and would allow for these protective orders to infringe Second Amendment rights based on third party allegations and little, if any, real evidence,” said the National Rifle Association’s Institute for Legislative Action in an alert on the measure.

Similar measures are tracking in Oregon and New York.