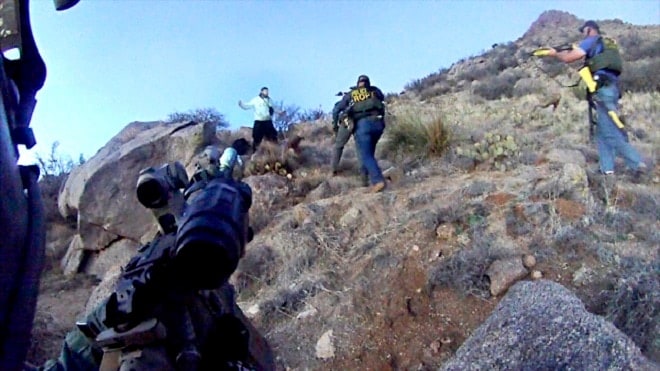 A screenshot from the helmet camera of one of 19 officers on hand during a March 2014 standoff that left James Boyd dead. (Photo: YouTube)

Federal prosecutors in New Mexico announced Tuesday there’s insufficient evidence to bring charges against two Albuquerque officers who shot and killed James Boyd, a homeless, mentally ill man, in the foothills of the Sandia Mountains more than three years ago.

Investigators reviewed video recordings, witness statements, ballistics, and other evidence and determined that officers fired “only after reasonably perceiving…a serious threat of physical harm to a fellow officer,” according to a news release from the U.S. Attorney’s Office in New Mexico.

Albuquerque Police Officer Dominique Perez’s helmet cam was rolling when he and more than a dozen other officers engaged 38-year-old Boyd on March 16, 2014. Boyd, a paranoid schizophrenic, had been illegally camping on the mountain for a month. After a four hour standoff with law enforcement, Boyd appeared to comply with officers’ demands and gathered his items to leave the area. That’s when a flash bang was thrown in his direction and a K-9 lunged towards him.

Boyd dropped his items and brandished two knives. Officers yelled at Boyd to “get on the ground” but he stood there facing them. As he turned around, Perez and Detective Keith Sandy opened fire, shooting him in the back. Boyd died the next day.

“At the time of the shooting, Boyd was brandishing two knives and was in close proximity to a canine handler,” prosecutors say. “Additionally, the officers were aware of Boyd’s violent criminal history, mental health issues, and his repeated threats to kill officers during the standoff. Consequently, there is insufficient evidence to prove that the officers’ uses of deadly force were objectively unreasonable.”

The federal investigation is now closed. Perez and Sandy were charged with second degree murder in early 2015. Their trial last fall ended in a mistrial. The newly minted District Attorney Raul Torrez said earlier this year the two men will not face a new trial.

“I have an ethical responsibility to pursue cases only when I think I can meet my burden of proof of trial and I just didn’t think we could do that,” Torrez said in February.

The city of Albuquerque paid the Boyd family $5 million after they filed a civil suit. In a statement released Tuesday, the Boyd family said they appreciate the resources deployed by the Justice Department and the FBI to investigate Boyd’s death.

“The Boyd family profoundly appreciates the uphill battle each and every family experiences in the wake of having a loved one taken unnecessarily and violently by law enforcement officers,” the family said. “His death galvanized the City of Albuquerque to make swift and lasting change within the City of Albuquerque police department that has no doubt saved lives.”