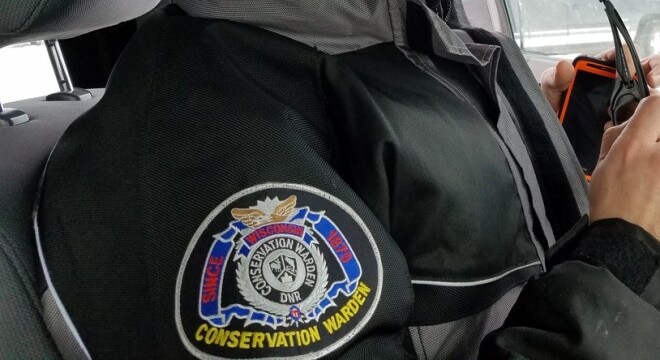 The move would curb current “open field doctrine” allows wardens to inspect open areas located on private land without a warrant or probable cause, which in the past has led to dangerous altercations. (Photo: DNR)

Introduced on the heels of a recent Wisconsin Supreme Court decision, the Assembly bill aims to trim the authority of a conservation warden to enter private land.

The measure, Assembly Bill 411, would prohibit Wisconsin Department of Natural Resources game wardens from setting foot on private property without reasonable suspicion a crime has occurred. Current “open field doctrine” allows wardens to inspect open areas located on private land without a warrant or probable cause, which in the past has led to dangerous altercations.

In 2012, two DNR game wardens went on the land of Robert Stietz in the dark and, when the armed property owner confronted the officers that he mistook for trespassers, the wardens wrestled his rifle away and drew their own guns on him. Stiez was subsequently charged and convicted of a number of crimes including resisting a law enforcement officer, which the Wisconsin Supreme Court last month overturned 4-2 and remanded for retrial, though he has already spent a year in prison.

“The DNR does not have the right to enter onto private property and disarm a property owner when they have no reasonable suspicion or probable cause as a basis for entering the property,” said AB 411’s sponsor, state Rep. Adam Jarchow, R-Balsam Lake, in support of the decision.

Jarchow’s legislation would limit the ability for DNR wardens to enter private property without a warrant or reasonable suspicion and make any evidence the warden finds on such an illegal entry not admissible in court.

The measure has 23 cosponsors, and the support of the Wisconsin Bear Hunter’s Association, while a host of groups including the Badger State Sheriffs’ Association, Sierra Club, Wisconsin League of Conservation Voters, and Wisconsin Sheriffs and Deputies Association oppose the bill.

“The entry of conservation wardens on to the open fields of private lands – without reasonable suspicion or probable cause – is fully consistent with the United States and Wisconsin Constitution,” George Meyer, executive director of the Wisconsin Wildlife Federation, told lawmakers Wednesday in committee hearings on the bill.

A Senate companion, SB 321, has seven co-sponsors and has been referred to the Committee on Natural Resources and Energy.