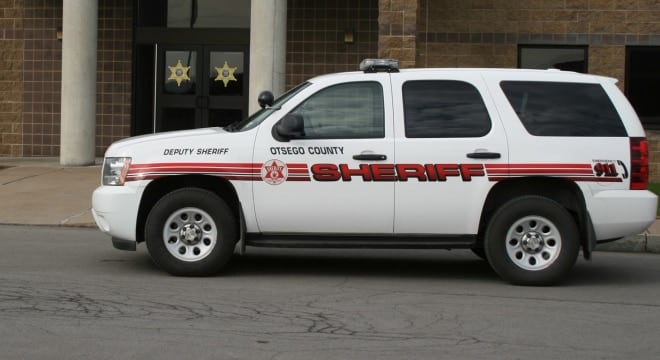 After retiring from the state police, Carroll worked for Otsego County, where he oversaw sending surplus guns from evidence to the incinerator. (Photo: OCSD)

A New York man who for years added guns from a sheriff’s department evidence room to his collection and was caught a decade after the fact will not go to prison.

Arnold Bruce Carroll, 75, of Maryland, New York, on Wednesday was sentenced to 150 hours of community service, a fine of $10,000 and two concurrent five-year periods of probation by a U.S. District Court judge.

According to court documents, Carroll was a long-time and respected law enforcement officer, taking the civil service exam in 1967 then working as a patrol officer and firearms instructor for the New York State Police for 26 years. After retiring from the state, he went to work for Otsego County, first as a DWI coordinator then accepting an appointment as the Undersheriff, which he held for another 14 years. Part of his job with the county was to destroy surplus firearms from the evidence locker.

Between 1995 and 2007 when he retired for the second time, Carroll diverted 73 firearms from evidence and marked them as destroyed, transferring them to his personal collection.

Authorities began to investigate the supposedly recycled guns in 2016 after an internal review generated enough questions to send federal agents to Carroll, where they could tie him to 11 of the stolen firearms including a Benelli shotgun, a Desert Eagle .44 magnum, and several Ruger and Smith & Wesson large caliber revolvers. In the decade since leaving law enforcement, Carroll had sold several of the firearms to a local gun store and at least one to an individual.

Carroll entered a guilty plea at his arraignment in February before District Judge Thomas J. McAvoy to one count of possession of stolen firearms and another to the sale of a stolen firearm. Each carried a maximum term of up to 10 years in prison and a $250,000 fine, followed by as many as three years of supervised release.

In a sentencing memo to the court, Carroll’s attorney said the retired lawman had no past criminal record, an extensive history of volunteering in his community, admitted his crimes when confronted and was a firearms lover and collector who just couldn’t let good guns be “chopped up” and melted.

“In his eyes, he converted property headed to the incinerator for his own collection,” said Carroll’s attorney, Michael Trosset.

“With Mr. Carroll admitting his guilt, relinquishing all of his firearms, foregoing the right to ever own a firearm again, being branded with a felony conviction and to perform community service, his case would effectively tell the public that police officers are not above the law and he was held accountable for his actions,” Trosset argued.

“It’s important for the public to know that this was the action of one person who acted illegally and violated your trust and the trust of our agency,” Devlin said.