The Office of Naval Research quietly released footage of the all-electric railgun spitting out a couple of rounds back-to-back at Mach 6.

The undated footage comes from Naval Surface Warfare Center Dahlgren Division, named after the famous 19th Century admiral whose “Dahlgren Gun” changed naval warfare leading to his nickname as the “Father of American naval ordnance.” And the electromagnetic railgun may be just as revolutionary.

As noted by the ONR’s page on the weapon, the 32-megajoule prototype launcher uses magnetic fields created by electrical currents to rapidly accelerate a projectile cradling armature between two rails– hence the term. This shoots a 35-pound kinetic projectile that carries no explosive to distances as far as 100-miles away at speeds of 4,500 mph. That is a couple of times faster than any current artillery and is inexpensive compared to a missile of the same range. Further, since the shells are inert, it simplifies storage and transport, enabling ships using them to not only buy them cheap, but stack them deep. 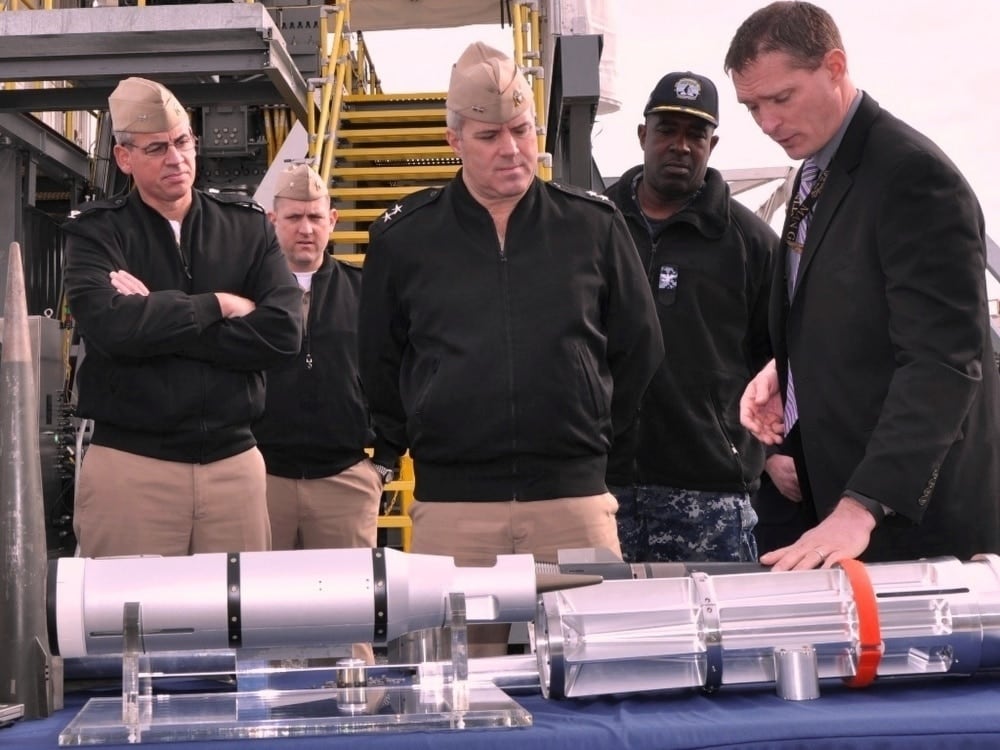 Reportedly, the Navy wants to be able to crank up the rate of fire to about 10 rounds per minute by 2018 which means the launcher needs to be able to recharge rapidly. In the above video, it shows two projectiles firing in about a 10-second span, which is short of the goal, but it is still progress.

The EM railgun also uses a lot of power — notice the conexes full of batteries at Dahlgren — which means the beast in current configuration could only mount on a few large ships with lots of extra juice (carriers and the new Zumwalt-class of very large destroyers) though it has been theorized that transports and cargo ships could carry one as long as it came with its own battery supply.

Regardless, it’s all pretty next level.

“The railgun is a true warfighter game-changer,” notes the ONR’s description of the program. “Wide-area coverage, exceptionally quick response and very deep magazines will extend the reach and lethality of ships armed with this technology.”