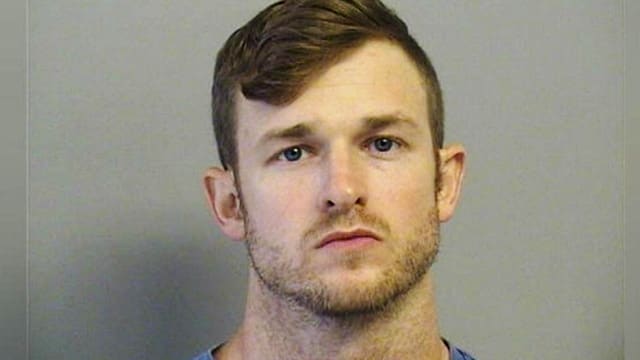 A former airman has been charged in connection with the explosion earlier this month outside of a Air Force Recruiting Station in Bixby, Oklahoma.

Federal authorities charged Benjamin Roden, 28, with destruction of federal property and the use of explosive to commit a federal felony, among other charges, the U.S. Attorney’s Office in Tulsa announced.

No one was injured when a pipe bomb blew up outside the recruiting station in Bixby on July 10, but the blast shattered windows and there was “significant structural damage” to the front of the building, authorities say.

Initially trained as a firefighter, Roden resigned from the Air Force when he couldn’t complete the necessary training to become an electrician. “Roden has been described as being upset with the U.S. Air Force for not being accepted into the U.S. Marines in addition to being described as ‘hating the military,’” says a criminal complaint.

He was identified as a suspect when a witness saw him speeding away from the facility on a red motorcycle. Federal investigators also pointed to a handful of Facebook posts.

“Any country willing to let me come over to you and get a job let me know,” he wrote on Facebook. “A Special [sic] warfare tactic was developed off of what I naturally do and I can teach what I do. I have knowledge of analog circuits, some electrician knowledge, and natural mechanical and electrical ability.”

“I think the u.s. Government [sic] is trying to keep me from leaving because of my special warfare capability,” he wrote. “They destroyed my passport before leaving active duty and they do not Normally [sic] do that. I have had a lot of problems with them spying on me as well. They think I am too smart.”

On July 11, agents executed a federal search warrant at Roden’s apartment in Tulsa. They found steel pipe, wiring, batteries, wire cutters, a book called “Practical Electronics for Inventors,” chemicals, a bag with two pipe bombs, an application for a German visa, $3,807 in cash, a handgun, and an AR-15.

Authorities also want to test the clothes he was wearing when he was arrested to see if there’s any sign of residue or chemicals used in manufacturing explosive devices.

“I view this conduct as not only a threat to the safety of the citizens of this district, but as an assault upon all of the dedicated men and women in this country who willingly support our military efforts,” said Acting U.S. Attorney, Loretta F. Radford. “I intend to seek a formal grand jury indictment.”