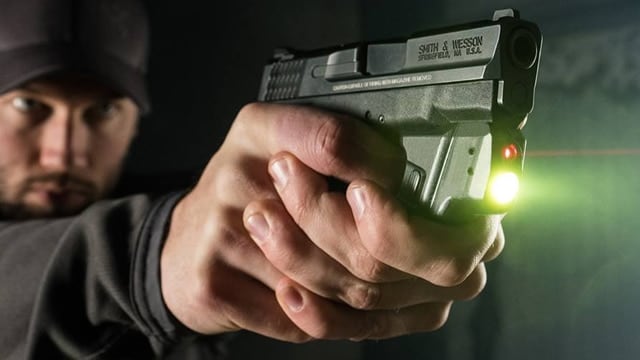 A LaserMax laser beam attached to a pistol made by Smith & Wesson, which own’s LaserMax’s competitor. Kinda funny. (Photo: LaserMax/Facebook)

Crosman acquired laser sight company LaserMax a couple weeks after the airgun and optics manufacturer was acquired by a Connecticut capital investment company.

The chain of events kicked off July 5 when Compass Diversified Holdings completed the purchase of Crosman for $152 million using both cash and credit, according to public filings of the transaction. Then, Crosman acquired LaserMax on July 20 for an unspecified sum using Compass’s revolving credit line.

According to the statement to investors, LaserMax has developed “significant intellectual property in laser technology, resulting in a comprehensive IP portfolio.” A search of the company’s website shows products for industrial use and firearms.

Compass is scheduled to release second quarter earnings next month and had closed out its first with $290 million in sales. For fiscal year 2016, the company reported $978.3 million in sales with a profit of $54.7 million.

Other outdoor or recreational companies falling under the Compass umbrella include 5.11 Tactical, Liberty Safes, and Sterno Products, the company’s website shows. Others include technology and clean energy companies.

When Compass acquired Crosman earlier this month, a spokesman from the companies assured the community of East Bloomfield that the acquisition would not negatively impact local jobs.