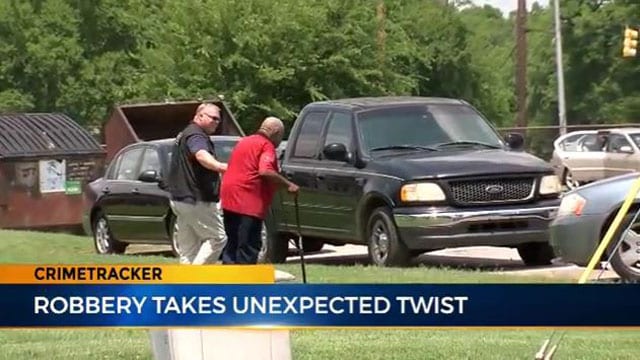 A police officer walks with Robert James Johnson, 72, after he fatally shot a man who was trying to rob him. (Photo: WJHL)

Two suspects attempted to rob a 72-year-old man outside of a Madison, Tennessee, apartment Wednesday afternoon, but only one walked away alive after the elderly victim opened fire.

According to reports from local media, the robbery was a set-up orchestrated by Molena Holt, 26, to pay off a drug debt.

Holt, who is homeless, asked Robert James Johnson if he would give her a ride to Springfield. Johnson agreed, but Holt told him she first needed to stop at an apartment in Madison so she could pick up some clothes.

After Johnson drove Holt to the apartment, she got out of the vehicle and walked around to the side of the building. Moments later, two men, one of whom was armed with a gun, approached Johnson’s vehicle and demanded money as they hit him multiple times.

“They didn’t know who they were messing with,” Johnson later told reporters. “They messed with the wrong person that day.”

Unbeknown to the suspects, Johnson was packing a pistol.

Johnson fired a single shot, striking Randall Caradine, 46, in the chest. Caradine was transported to a hospital and died a short time later, while the second suspect made off with $1,000 in cash and remains at large.

Following the robbery and subsequent shooting, authorities interviewed Holt, who admitted the robbery was previously planned in order to pay off a $30 drug debt owed to Caradine and the second suspect.

Holt, who has prior drug and prostitution convictions, remains jailed with a $100,000 bond.

Johnson, who was robbed at gunpoint two years ago and swore he would never be a victim again, didn’t shy away from telling reporters that he aimed to kill, noting that all he needed was one shot.

“I’m a good shooter,” Johnson said, adding that he’s sorry he “didn’t get the other one.”