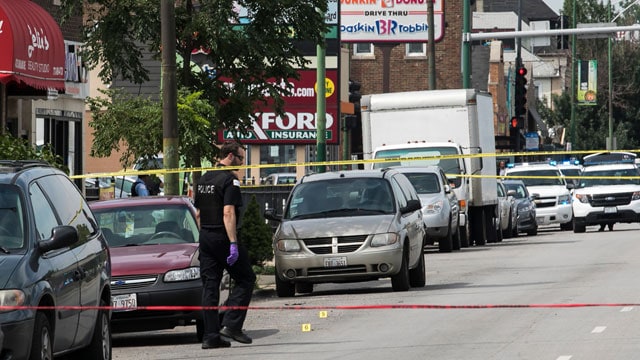 Authorities have not released the injured officer’s name, but confirmed it was a female officer who has been with the department for about two and a half years. (Photo: Chicago Sun-Times)

A police officer is expected to recover after she was shot Friday afternoon while responding to a call about an armed robbery at a Chicago cell phone store.

Anthony Guglielmi, chief communications officer for the Chicago Police Department, confirmed that a suspect is in police custody, although it’s unclear if authorities are searching for additional suspects.

The call came in around 1:30 p.m., but by the time the officers arrived, the suspects had fled from the T-Mobile store where the robbery occurred. However, Chicago Police Superintendent Eddie Johnson told reporters the officers were pointed in the direction of the suspects by witnesses on the scene.

After catching up to the suspects, as the officers exited their patrol car, Johnson said “one or more offenders” shot at the officers, who returned fire. A female officer was struck in the leg and her partner pursued the suspect, who was eventually found hiding in a nearby alley and taken into custody.

Johnson confirmed that a weapon was recovered from the scene, but said the ATF is working to determine whether it was the gun used in the robbery and subsequent shooting of the officer. Johnson also said they were speaking with a “person of interest” but it’s unclear if that person is believed to be involved in the robbery or shooting.

The injured officer was rushed to the hospital for medical treatment and later released.

Mary Gonzalez, a 36-year-old mother of three, said she was in her apartment nearby when the shooting occurred. She said although a drive-by last year left more than two dozen bullet holes in her building, the neighborhood has remained relatively quiet until summer. Gonzalez said gunfire is now a daily occurrence.

One resident, who did not want to be identified, witnessed the shooting unfold as he stood outside of a neighborhood bar smoking a cigarette. He told the Chicago Tribune it “was like the Wild West.”

Despite the area bustling at the time of the shooting, there were no other reported injuries.

The Chicago Police Department thanked everyone for their support and for all of those who asked for a speedy recovery for the injured officer.