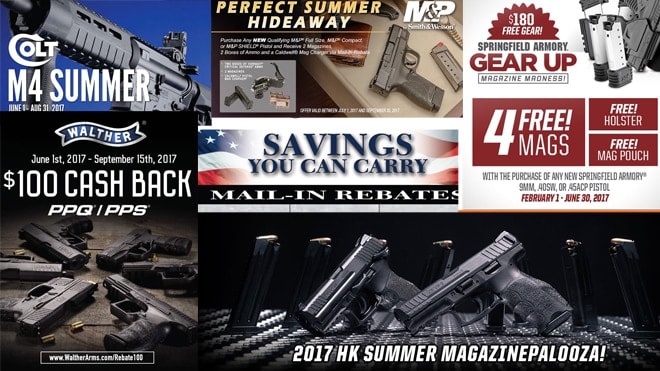 Rebates galore! Gun manufacturers have been promotion heavy this year due to reduced demand. (Graphic: Guns.com)

With hunting season in the distance and no major buying holidays in sight, the summer months are notoriously hard on gun makers. Looking toward alternative marketing strategies to hobble through the slow months, large gun manufacturers are turning to rebates and consumer promotions to drive sales.

In terms of marketing, sales promotions are a short-term strategy designed to accelerate sales of certain products, level out peaks and troughs, drive customer loyalty and clear out aging stock to make way for new products in the fall and winter months.

“Sales promotion is a method of increasing sales over the short term, to win business from competitors in a well-developed sector,” Marketing Donut explained. “But used with care, sales promotion can turn dead stock into cash, draw new customers into your premises and raise your profile.”

Sales promotions come in a variety of flavors. Smith & Wesson opted to enact the rebate, allowing customers to “cash in” on certain products with up to $75 in rebates. Kahr and HK offered consumers free magazines with the purchase of select inventory while Kriss USA paired a new Vector with a new Vortex optic. Ruger ran several promotions through the summer to include its famed “Ruger Days” which offered a variety of sales prices, giveaways and free merchandise at authorized retailers throughout the U.S. Consumers can also buy a Colt M4 and get a free Drago Gear Gun Case and a Magpul PMAG through the end of August.

He added, “Coming out of the election, you saw a lot of inventory … so we had to be aggressive on our promotions.”

With June gun sales slipping 12 percent over 2016, gun makers are relying on consumer promotions to creep by.

“It’s a pretty promotionally intense environment right now,” James Debney, president of American Outdoor Brands, said during a June 29 conference call with investors. “What is really difficult to understand is how much is that helping NICS – adjusted NICS, okay, versus the prior year. We just don’t know. It’s tough to understand a lot of noise out there.”

Though companies like Ruger and Smith & Wesson run promotions nearly every year, Kriss USA entered the summer promo game for the first time. The company launched an offer serving up a new Vortex optic with the purchase of a non-NFA Vector carbine.

“This is the first year that we have run a summer promotion for the Vector,” said Tim Seargeant, Kriss USA marketing manager, in an email to Guns.com. “Our primary goal to promote the Kriss Vector this summer, by offering a complimentary Vortex optic for each one purchased, was to bring more value to our platform and to make the Vector more interesting to summer shoppers.”

The Vector/Vortex combo was introduced in late June with the promo carrying through the end of September.

“The timeline coincides with the summer season which is historically slower for the industry, as can be seen in the NSSF Adjusted NICS Data,” Seargeant said.

Despite the summer months’ grip on the industry, not every gun maker is looking to promotions and rebates as a means to move products. Smaller companies, who often don’t have the level of inventory or overhead to handle large scale marketing strategies, are keeping to business as usual.

“YHM does not operate on the scale that S&W or H&K do. We do not have thousands of firearms sitting in our inventory based on pre-election speculation that we need to quickly get rid of in order to stay profitable. We take a much more moderate approach to our inventory,” Graham said. “Typically smaller companies have smaller inventories, smaller overhead and often smaller profit margins. A rebate of the magnitude we are seeing from the ‘big guys’ could effectively eliminate any profit to be had on a product from a smaller manufacturer.”

Though YHM doesn’t utilize sales and rebates to the same degree as Smith & Wesson, that doesn’t mean YHM fans aren’t provided with decent deals. The company is currently offering 15 percent off complete top-end assemblies, equating to a $150 value.

Though gun makers readily admit to the summer squeeze, hopes are high for the coming months when hunting season and the holidays are expected to swing sales upward.

“The market will definitely pick up later in the year,” Seargeant said. “Black Friday has historically kicked off the holiday buying season with the biggest day for background checks, and that trend is expected to continue this year.”

Graham said though sales have been slow, YHM optimistically looks toward the future.

“We are seeing our typical summer slowdown period. It may look more severe this year because the firearms market as a whole is slower than past years but it seems pretty much in line with what (has been) previously seen for this time of year,” Graham said, adding sales are expected to return as the hunting and holiday seasons approach.