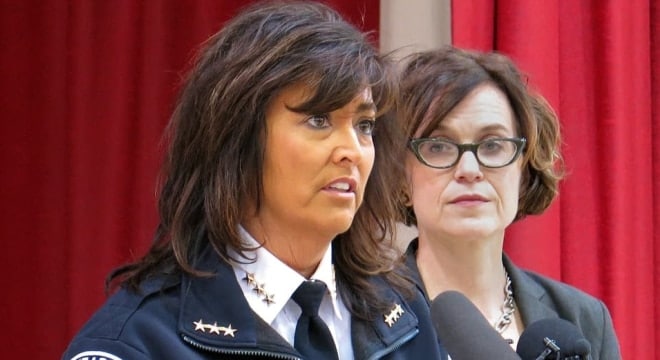 Controversial Chief Janeé Harteau was asked by Minneapolis Mayor Betsy Hodges to leave the agency in the aftermath of the shooting of Justine Damond.

Harteau submitted her resignation Friday after Hodges said she had lost confidence in the city’s top cop.

“In a conversation with the Chief today, she and I agreed that she would step aside to make way for new leadership,” said Hodges in a statement. “I asked Chief Harteau for her resignation, she tendered it, and I have accepted it.”

Hodges and city leaders have been under mounting pressure following the fatal officer-involved shooting of Damond, 40, of Sydney, Australia on July 15. Officer Mohamed Noor, a 31-year-old Somali-American immigrant, allegedly killed Damond with a single gunshot to the abdomen fired while he was still inside his car, did not have his body camera active and has reportedly declined to make statements to investigators.

Just before being asked for her resignation, Harteau told media last week the shooting “should not have happened” and criticized the actions of the officer involved.

“I’ve decided I am willing to step aside to let a fresh set of leadership eyes see what more can be done for the MPD to be the very best it can be,” said Harteau in a statement posted on her social media account after she left the department.

When appointed in 2012 after nearly three decades with the agency, she was the first female, openly gay, and Native American chief in the department’s history.

The news of Harteau leaving the department was welcomed by Second Amendment advocates in Minnesota.

The chief last year was named a charter member of former U.S. Rep. Gabby Giffords’ Minnesota Coalition for Common Sense organization. The group was formed to work towards an expansion of background checks to include most private gun transfers and increased reporting of mental health records by the state to the Federal Bureau of Investigation’s National Instant Criminal Background Check System.

In 2013, Harteau was reportedly one of 20 people chosen to meet with President Obama to speak about increased gun control.

“We couldn’t be more excited to see anti-gun Minneapolis Chief Janee Harteau go down in flames due to her utter and complete incompetence at the job!” said Minnesota Gun Rights in a statement.