Army sergeant pleads not guilty to attempting to provide documents, training to ISIS 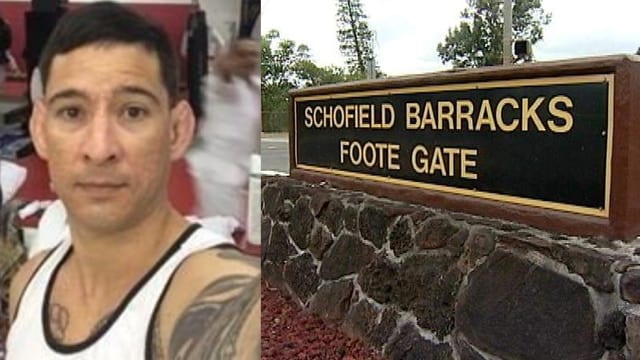 Ikaika Kang made pro-ISIS arguments and threatened service members as far back as 2011, according to court documents. (Photo: Hawaii News Now)

An Army sergeant in Hawaii pleaded not guilty Monday to charges alleging he attempted to provide equipment and training to members of ISIS.

Ikaika Erik Kang, 34, was indicted July 19, charged with four counts of attempting to provide material support to ISIS, according to a news release from the Department of Justice.

Believing them to be members of the Islamic State, Kang met with undercover federal agents between June 21 and July 8. According to court documents, he gave them “sensitive but unclassified documents” with the intention of assisting ISIS.

Having achieved the highest level of combat training in the U.S. Army, Kang conducted “expert military-style combatives training to a person who purported to be a member of ISIS.” He repeatedly said he wanted to provide training to ISIS fighters, and suggested the training sessions be videotaped, according to a sworn affidavit. Kang also provided a drone, military clothing and equipment to the undercover agents.

As far back as 2011, Kang was reprimanded on several occasions for threats he made against service members. He also argued pro-ISIS views while on duty. His security clearance was revoked in 2012 as a result, but was later reinstated after he complied with military requirements.

“In early 2016, it appeared that (Kang) was becoming radicalized, and … the Army referred this matter to the FBI,” says the affidavit.

That’s when Kang first started interacting with an informant. He told the confidential human source he wanted to take revenge on a civilian who’d wronged him by pouring Drano in his eyes. Another time, while talking about the shooting at the Pulse nightclub in Orlando, Kang said, “the shooter did what he had to do,” adding “America is the only terrorist organization in the world.”

In another instance, Kang said he believed in the mass killing of Jews, saying, “Hitler was right.”

In November 2016, the FBI conducted a court-authorized search of Kang’s computer and a hard drive. They found 486 documents that referenced ISIS, ISIL, or violence. The documents included 13 issues of Inspire, an English language magazine published by Al-Qada in the Arabian Peninsula. The magazine is “aimed at inciting violence among would-be terrorists in Western, English-speaking countries.”

Earlier this month, Kang met several undercover agents at a house in Honolulu. That’s when agents told Kang one of the people in the meeting was a member of ISIS. The next day, on July 7, Kang showed up to the house with “his AR-15 type rifle, his pistol, a folding knife, masks, camouflage pants, vests, and a case of water.”

“(Kang) played several hours of ISIS videos, and eventually moved to more graphic videos, to include a video that (Kang) described as his favorite, which depicted beheadings,” says the affidavit.

One of the agents, pretending to be a leader of ISIS, asked Kang if he was with the U.S. Army or the Islamic State. Kang said he was with ISIS. On July 8, he wrote a lesson plan and made charts for the combat training videos. He also helped one of the agents pick out a Go-Pro Karma drone, which he said would be useful for viewing the battlefield from above in combat scenarios.

That same day, he swore a pledge of loyalty, or bayat, to ISIS in a ceremony with one of the agents. The agent gave him an ISIS flag, and Kang read the ISIS pledge in Arabic. He also told agents he wanted to “kill a bunch of people.” He was arrested by the FBI later that day.

According to the affidavit, he admitted to giving the secret documents to agents and training them.

Kang is a trained air traffic controller who served in Iraq from March 2010 to February 2011 and in Afghanistan from July 2013 to April 2014. He was most recently stationed at Schofield Barracks in Hawaii.

He’s due back in court on Aug. 21 for a pretrial hearing before his trial starts in September.