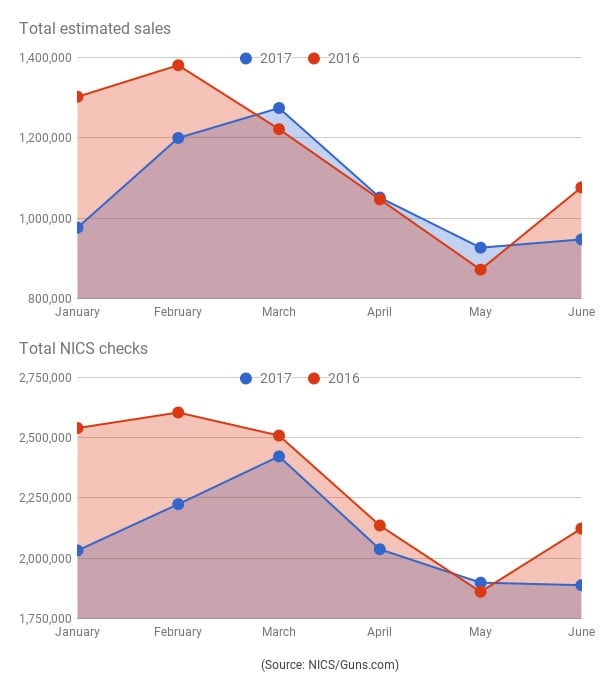 Estimated gun sales for the first six months of 2017 trail last year by just over 7 percent, according to federal data.

Applications submitted to the FBI’s National Instant Criminal Background Check System tallied nearly 6.4 million through June 30, down more than 500,000 from 2016 — the biggest year on record for background checks, and by proxy, gun sales.

The measurement, however, isn’t perfect. Background check applications don’t capture every gun sold due to variances in state laws and the ability of one application to suffice for the sale of multiple firearms.

Of the 12.5 million background checks processed through NICS this year, Guns.com estimates about half resulted in a transfer. The majority of the remaining applications correlate to concealed carry permits.

As anticipated, June checks fell 12 percent over last year as the gun industry braces for the slow summer season — this, after estimated sales in March, April and May outperformed expectations.

Top executives for major retailers and gun makers — including American Outdoor Brands and Vista Outdoor — have exercised caution when providing second quarter forecasts, insisting deep discounts and a backlog of inventory have propped up sales in the absence of political pressure.

“It’s certainly going to be down over last year,” Jeffrey Buchanan, executive vice president of American Outdoor Brands, told investors during a June 29 conference call. “The last year was definitely an aberration. But if you look at the graph of NICS … we expected just to follow with a typical seasonal pattern last year and did not. But this year that’s what we expect.”

The FBI will release data for background checks in July next week.