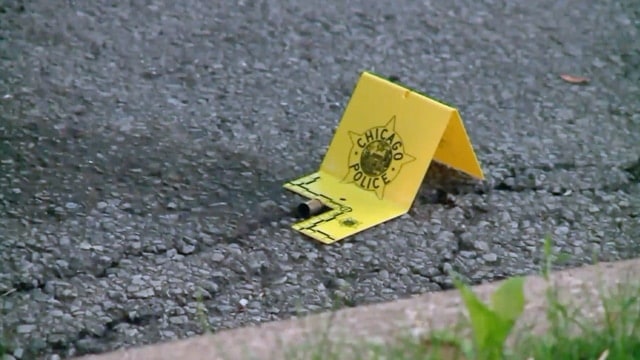 A crime scene marker sits near a shell casing in Chicago. (Photo: WGN-TV)

Chicago Police Superintendent Eddie Johnson on Monday said his department has recovered more than 5,000 firearms from city streets so far this year, as the number of homicides outpace a historically violent 2016.

The announcement comes after another violent weekend in the Windy City. Six people were killed and 35 others injured, bringing the death toll so far this year to 391. That’s four more than this time last year, when 783 people were killed — a year end homicide figure not seen for more than 20 years. Still, the total number of people shot is on the downtrend, with 2,112 shot so far this year, compared to 2,337 this time last year, according to data tallied by the Chicago Tribune.

Johnson attributed that progress to “new technology,” as well as the Chicago Police Department’s partnership with federal authorities. Earlier this month, CPD announced that 20 new ATF agents began working in the city, cracking down on gun traffickers and repeat gun offenders, and giving law enforcement the ability to trace weapons within hours — rather than days.

Johnson said many of the guns coming into Chicago are smuggled in from out of state by gang members’ girlfriends. “They purchase these guns, come back and then they distribute them to the gangs,” he said. “So we actually need to have a law that enables us to track handguns after that person purchases it.”

“Think about this, if your car comes up stolen, what’s the first thing you do? File a police report,” Johnson said. “If a handgun comes up stolen, which can conceivably be used in a homicide, there’s nothing in place that will force people to report the handgun as missing or stolen. So until we get a better tracking system for these things, we’ll continue to see these things occur.”

While Johnson may have been referring to federal law, Illinois actually does have a mandatory loss/theft reporting law on the books. If an Illinoisan with a Firearm Owners Identification card and a gun realizes their weapon has been lost or stolen, they’re required to notify local law enforcement within 72 hours. Officers then enter that information into a statewide database. Illinois is one of 12 states with such a law.

Aside from calling for a gun registry, Johnson also took aim at rifles. With an uptick in the number of semi-automatic rifles being used in Chicago shootings, he said there’s no need for civilians to have the weapons in the city.

“Those are military-grade weapons,” Johnson said. “There’s no need for them here.”

“We need the communities to step up”

While police pull illegal guns off the streets and work to reduce the number of shootings in problem areas, Johnson said tips from witnesses — a rare occurrence in Chicago — would be a big help in driving down gun violence.

“We need the communities to step up,” he said. “There’s no such thing as a perfect crime.”

“When the neighborhoods get sick and tired and get fed up and start giving us the information that we need, then we’ll start seeing a reduction in gun violence.”