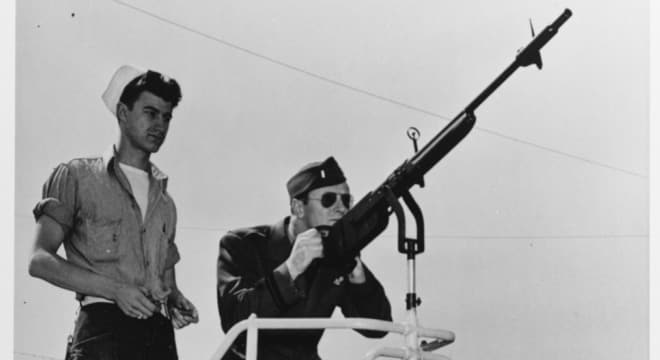 Rapid sight alignment when leading a flying target was a skill quickly taught to aerial gunners in World War II with the help of more than 70,000 training shotguns.

It’s a simple concept, with a shotgun being easier and cheaper to cut a trainee’s teeth on “wing shooting” than a full-sized machine gun. Accordingly, the Army and Navy bought 59,961 Remington Model 11 semi-auto (the company’s version of the Browning A5) and 8,992 Model 31 pump-action shotguns as well as 204 million clay targets and got to work.

The below Army Air Corps training film from 1943 — which includes Lt. Ronald Reagan — shows how aerial gunners, in particular rear gunners, were trained. You can see Lt. Burgess Meredith start working with M31 shotguns and clays at about the 8:34 mark before moving up to full-sized.30 cal and .50 cal machine guns.

As a side note, the Air Force reportedly retired the last airman who entered the service as a B-52 tail gunner earlier this year.