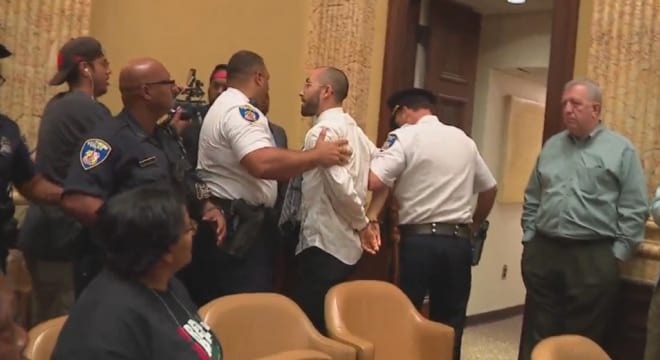 Two were arrested after a scuffle following lengthy hearings this week on a controversial proposal to establish a mandatory minimum sentence for those found with handguns near Baltimore schools, parks, and other public buildings. (Photo: WBFF)

After a public hearing degenerated into arrests in Baltimore on Tuesday, an amended draft ordinance designed to bring strict sentencing for some found with guns passed out of committee.

The proposal, which originated with Mayor Catherine Pugh’s office, was passed 5-2 by the Judiciary Committee after hours of sometimes emotional hearings were briefly interrupted by the arrest of two people following a melee, as reported by local media.

As modified this week, first-time offenders would not be eligible for the mandatory sentence except in cases where the illegal handgun they possessed was used in a crime. Also, the state’s attorney’s office could use discretion in charging individuals with violations of the city ordinance should it become law, skirting the issue entirely.

However, even diluted from the original language proposed by Pugh, the bill is facing serious opposition from some on the Council. Prior to this week’s hearings, slightly less than half of the 14-member body was in favor of the measure and a few outliers remain unconvinced.

Brandon Scott, who represents the Second District, told WJZ he was staunchly opposed to the proposal.

“The amendments make the bill easier to stomach, it still doesn’t change the fact that I disagree with the bill in its entirety and its principles of mandatory minimums,” Scott said.

In addition, the ordinance has drawn fire from civil rights advocates, with attorney Joshua Prince penning a letter to city leaders warning of a number of potential legal pitfalls resulting from the patchwork of new gun free zones and arbitrary language.

The amended measure is expected to be taken up by the full council on Aug. 14.